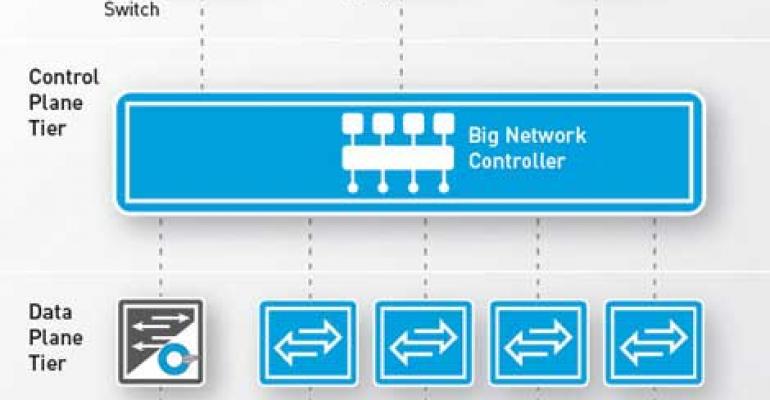 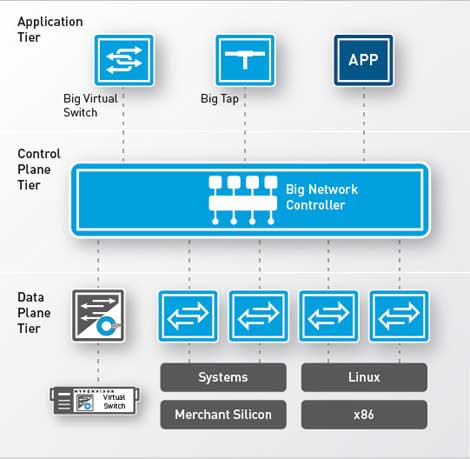 A diagram of the three-tier network featuring Switch Light, an open source effort that provides thin switching based on the OpenFlow project.(Image: BigSwitch Networks)

Big Switch Networks this week introduced introduced Switch Light, an open source thin switching software platform that can be deployed as a virtual switch for server hypervisors. BigSwitch's ambitious goal is to accelerate the adoption of OpenFlow-based networking, providing more choices in networking hardware and reducing the cost of operating virtual and physical networks.

As a part of the Big Switch Networks Open SDN Suite, Switch Light will include both open source and commercial solutions for the community and enterprise customers. Initially it will be available to run on a range of merchant silicon-based physical switches (Switch Light for Broadcom) and virtual switches (Switch Light for Linux), and will be ported to other data plane devices in the future. Switch Light will be available for free, with Big Switch Networks offering technical support and commercial services when it is deployed with other products in the its suite.

"In making our open-source thin switching platform available to the market, we aim to accelerate the development of OpenFlow-based switches, both through ODM and OEM partners, thereby catalyzing the deployment of OpenFlow networks," said Guido Appenzeller, CEO of Big Switch Networks. "Customers are demanding choice in Open SDN hardware and want to unite their physical and virtual platforms. Switch Light is an important step down that path."

Among those welcoming the arrival of Switch Light was Quanta Computer, the Taiwan-based original design manufacturer that is moving into direct sales of servers based on designs developed by the Open Compute Project. Quanta could benefit from the development of open networking alternatives such as Software Defined Networking (SDN), just as it has from open server and storage designs.

"Quanta has a proven record of success and leadership in deploying servers, storage and top of rack switches to big data centers,” said Mike Yang, general manager and vice president of Quanta QCT. “We see demand for a similar model in the networking market that keeps growing but has traditionally been dominated by proprietary vendors.  Partnering with an SDN innovator like Big Switch gives our clients a reliable choice with a complete open SDN stack."

Switch Light is based on the open source Indigo Project, a sub-project within Project Floodlight, an open source SDN community project that was launched this week.

Big Switch also announced that Project Floodlight has grown to be the world’s largest open source SDN community, already encompassing over 200,000 lines of code, 15,000 downloads of the Floodlight controller, and contains contributions from more than 10 ecosystem institutions and vendors around the world. The updated open source community website replaces OpenFlowHub.org. Big Switch Networks open source community initiatives date back to Stanford University and the Clean Slate Project, which was led by Appenzeller, the company’s CEO and co-founder.

At the core of Floodlight is the Indigo Project, which produces open source software that is used by developers and vendor partners to implement the OpenFlow protocol on physical and hypervisor switches. A growing list of innovative users and ecosystem vendor partners around the world are building applications and deployments on open source SDN projects including the Floodlight controller and the Indigo OpenFlow agent. Companies include 6WIND, Canonical, Caltech/CERN, FireMon, Overture, Radware, and SRI International.

"Ubuntu is the most popular platform for OpenStack because of its ability to integrate cutting edge technologies,” said Kyle MacDonald, Canonical VP of Cloud. “Our enterprise and carrier customers are already demanding advanced networking solutions based on open standards, so we are supportive of Big Switch's commitment to Open SDN and Project Floodlight, as they provide our customers the flexibility needed to build dynamic cloud infrastructure while simplifying network operations."

Head of Open Source at Big Switch Networks Paul Lappas writes the introductory blog post about Project Floodlight and its transition from OpenFlowHub.org, which launched in January 2012.