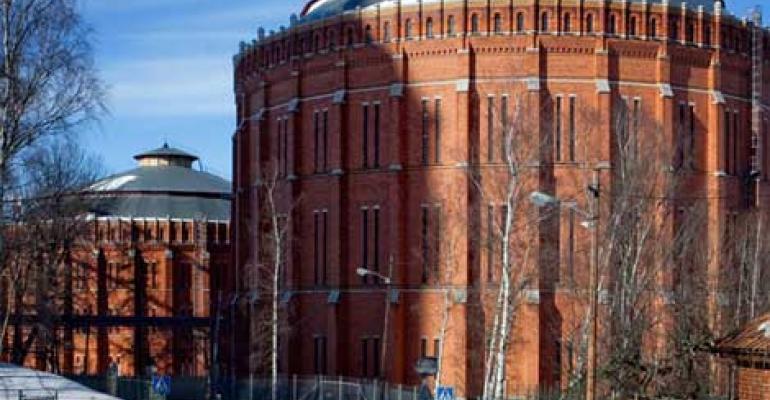 In one of the more interesting retrofit projects we've seen, a Swedish ISP is planning to convert a huge former natural gas holding tank into a five-story data center. The developer is Bahnhof, which has gained notice for its unusual data center designs. 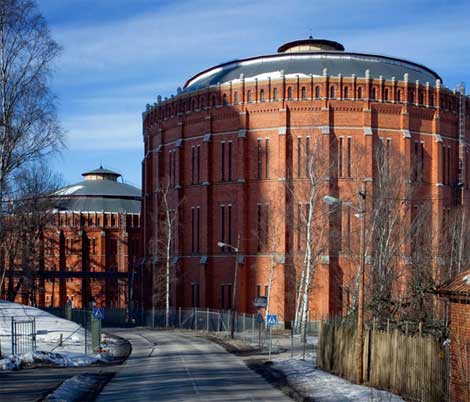 The exterior of the Stockholm Gasometer, which was built in 1893. Swedish ISP and hosting provider Bahnhof hopes to convert the building into a data center. (Photo: Bahnhof)

In one of the more interesting retrofit projects we've seen, a Swedish ISP is planning to convert a huge former natural gas holding tank into a five-story data center. The developer is Bahnhof, which has gained notice for its unusual data center designs, including the "James Bond Villain" data center in a former nuclear bunker and a modular unit designed to look like a space station.

This time Bahnhof plans to rehab one of Stockholm's huge gasometers - a towering building designed to store gas -  and turn it into a five-story data center housing thousands of servers.  The gasometer project is one of two new data centers planned by Bahnhof, both of which will capture waste heat from servers for use in district heating systems that will provide energy for homes and offices.

The second project, known as Nimrod, will be built on the site of one of the plants feeding Stockholm's district heating and cooling system. The existing building is operated by Fortum, a large energy company in Stockholm.

"Fortum let us construct a data center on top of Europe's most powerful heat pumps for a direct transfer of heat into their system," said Jon Karlung, the CEO of Bahnhof, whose love of futuristic design has informed the company's facilities. "Why vent the energy out?"

Karlung says these projects are envisioned as data centers for large IT companies, and that Bahnhof is in talks with a large US company about one of the sites. "There is really a substantial interest," said Karlung. "The concept works for anybody that doesn't want to ventilate out money in thin air. Our role is to build and provide the concept. We do this as part of our business. We are also a hosting provider, but this is pure design and construction."

The gasometer is a cylindrical building erected in 1893, constructed with red bricks and enclosed by a spectacular wood and steel ceiling structure as ceiling, which Bahnhof says contributes to the "sacral character of the space." Here's a look at the building's interior: 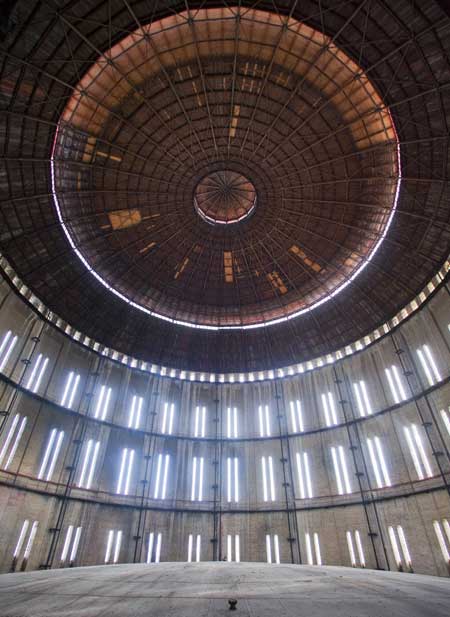 Bahnhof has commissioned two designs for the gasometer site. One is from Albert France-Lanord, the designer of Pionen White Mountain, Bahnhof's stylized high-tech underground fortress 100 feet beneath Stockholm.

Lanord's design calls for five floors of server rooms, with an open corridor down the middle that divides the facility into two half circles, with the empty area in the center crossed by bridges and stairs. The top floor would be used for cultural activities. This design could support up to 3,500 servers. Here's an illustration of Lanord's design concept. 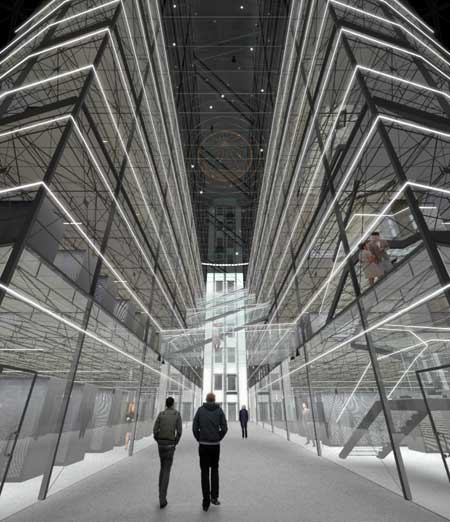 A second design concept from SplitVision features just two floors of servers for a total of 10 megawatts of IT load. "Here the goal is to use the gasometer as more of a landmark, and a spectacular building for a data center," said Karlung.

The bottom two levels would house the data halls, giving way to a large open space in the upper part of the tower. A center elevator would provide access to a glass conference room on the third level (similar to the "floating" conference room at the Pionen facility). The sixth level will house a bar, topped by an "air walk": a 360 degrees floating glass walkway with spectacular views of the interior and roof construction. The elevator will also provide access to a rooftop vantage point overlooking Stockholm. Here's a diagram: 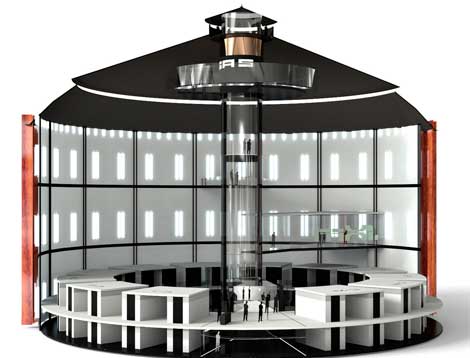 Of course, these projects are in the design phase, and it's early to know whether these visions will be fully realized. But with White Mountain and Bahnhof's nascent modular business, Karlung has already brought several stylized data center visions to reality.

Some of Karlung's marketing efforts will be controversial among the broader data center community, such as the claim that the new facilities will have Power Usage Effectiveness ratings of 0.8 and 0.5. A measurement below 1.0 is theoretically achievable if on-site power generation and heat reuse is included. Many data center professionals don’t recognize claims of a PUE below 1.0, saying it is not in the spirit of the metric. In an latest update on PUE measurement (PDF), the Green Grid has included guidance for companies using on-site cogeneration or reusing waste heat from servers.

Karlung believes that data centers filled with cutting-edge technology should also look cool, and that his flair for futuristic visual design can build a distinctive brand. With these latest proposals, the industry will see if Karlung can deliver his vision for another distinctive project.