Houston, Texas is the favorite hosting location for the world's most popular web sites, according to Pingdom, which has mapped the hosting universe by mapping the homes of the top 1 million sites. 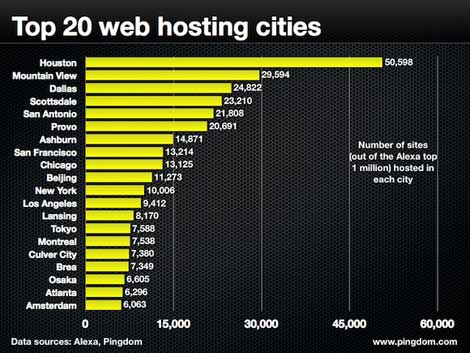 Houston, Texas is the favorite hosting location for the world's most popular web sites, according to Pingdom, which has mapped the hosting universe using the top 1 million sites. The Pingdom survey found Houston was the clear winner, hosting 50,598 of those top million sites, followed by Mountain View, Calif. (29,594 sites), Dallas (24,822) and Scottsdale, Arizona (23,210).

Why are these locations ranked so highly? Not surprisingly, the top cities track with the locations of major hosting companies.

An example: Houston is the home to multiple data centers hosted by SoftLayer Technologies, which houses more than 100,000 servers across its infrastructure (see Who's Got the Most Servers? for more). Because SoftLayer is a "host of hosts," popular sites hosted by large providers like HostGator and Site5 also map to Houston. Hosting's not the only game in town, as dozens of the world's largest energy companies also host their infrastructure in the Houston area, much of it at CyrusOne.

Mountain View is home to Google, which operates many of the world's most widely used web services, including hosting offerings like Blogger and Google App Engine. The numbers for Mountain View may also reflect some of the many sites hosted in data centers in adjacent Silicon Valley hosting hubs, like Sunnyvale and Santa Clara.

Dallas is home to more than 50 data centers for many of the world's leading hosts, including Rackspace, SoftLayer, CI Host, Colo4Dallas, Savvis and Terremark/Verizon, as well as major hosting buildings such as the INFOMART and 2323 Bryan (the Univision building).

Scottsdale is the location of domain registrar GoDaddy, which is also one of the world's largest shared hosting providers (for a closer look at the company's operations, see Inside Go Daddy's Phoenix Data Center). Scottsdale is also home to a major multi-tenant data center for IO.

While most of the top 20 cities in the Pingdom survey are familiar to followers of the data center industry, there are some that aren't immediately obvious. Brea? That would be Brea, California, which is where DreamHost houses some of its operations.

For more including a map and photo, see the post over at Pingdom. For additional coverage, see Houston Hosts More than 50K of the Top Million Websites at The WHIR.