Server sales are up after a sluggish start to 2012, but growth isn't coming from the incumbent server vendors, say new reports from Gartner and IDC. 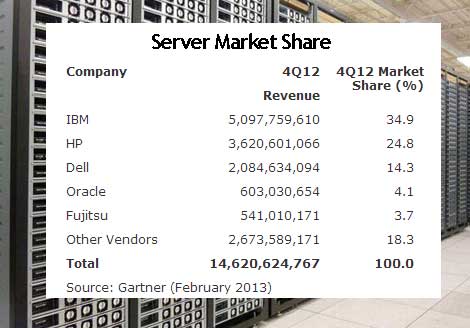 Server sales are up after a sluggish start to 2012, but growth isn't coming from the incumbent server vendors, say several new reports. The "other" category, which includes Quanta and other companies building custom servers for large cloud companies had the most impressive growth, suggesting a significant impact for Open Compute designs at the expense of major server makers like Dell and HP.

So while reports from IDC and Gartner show a slightly down year for servers, there was positive growth in the fourth quarter, driven by hyperscale data centers. Enterprise adoption of new server hardware was sluggish, with hyper-scale Internet companies and service providers driving growth.

Gartner and IDC saw revenue increase 5.1% and 3.1% respectively in the fourth quarter of 2012 versus same period 2011, but both saw declines of 0.6% and 1.9% for the year compared to 2011. IDC said The Q4 increase was the first quarterly increase in five quarters.

While hyperscale data centers were a bright spot in fourth quarter sales, overall annual sales are still being dragged down by enterprise delays. “2012 was a year that definitely saw budgetary constraint which resulted in delays in x86-based server replacements in enterprise and mid-sized data centers,” said Jeffrey Hewitt, research vice president at Gartner. “Application-as-a-business data centers such as Baidu, Facebook and Google were the real drivers of significant volume growth for the year.”

Gartner’s outlook for 2013 suggests that modest growth will continue. These increases continue to be buffered by the use of x86 server virtualization to consolidate physical machines as they are replaced. Some replacements are likely to begin in the enterprise segment as servers continue to age and economies improve.

IDC is observing an increased interest from the market for converged systems, suggesting enterprises are latching onto the idea of turnkey solutions. Servers optimized for high density were helped by the growth of service providers in the market as well.

"Blade servers are being leveraged in enterprises' virtualized and private cloud environments," said IDC, which said enterprise IT organizations are viewing converged systems as a method to simplify management and increase their time to value. IDC said blade server revenue grew 3.3 percent from last year to $2.4 billion, accounting for 16.3 percent of total server revenue. Gartner said blade servers posted a revenue increase of 3.2 percent but a shipment decline of 3.8 percent for the year.

Another interesting trend is being driven by Open Compute. Gartner’s data shows strong growth for vendors lumped under “Others,” which includes Quanta and other companies (Hyve, ZT Systems, WiWynn) building custom servers for large cloud companies.

Growth from a geographic perspective

IDC had forecast that server demand would begin to improve in the second half of 2012, following a number of product refreshes in the first half of the year. That was correct, albeit the turnaround was a quarter later than expected due to sluggish enterprise buying and soft market demand in particular regions.

“While this did happen in the fourth quarter, market demand was uneven with the U.S., Asia/Pacific and Latin America all experiencing sharp growth, while demand in all other regions remained soft," said Matt Eastwood, group vice president and general manager, Enterprise Platforms at IDC. "Average selling prices for servers increased sharply in the quarter as large and small enterprises continued to invest heavily in new server capacity to drive additional consolidation and virtualization initiatives."

Gartner saw similar growth patterns from a geographic perspective.There was server revenue growth in spite of relative softness in some regions, most notably Western Europe. The three highest growth rates were shown by North America (5.5 percent), Asia/Pacific (3.4 percent) and Latin America (0.2 percent) in terms of unit shipments. These were the only regions to experience an increase in shipments. These three regions grew at a rate of 16.3, 15.5 and 6 percent respectively.

Both research houses once again had had IBM as the top server vendor. IDC said it had 36.5% market share, while Gartner accords Big Blue a 34.9% market share. IDC attributed IBM's growth to improvements in demand for its System z mainframes, which recorded their highest quarterly revenue for System z in more than a decade. Revenue for IBM's System z mainframe running z/OS increased 55.6 percent year-over-year to $1.8 billion, representing 12.3 percent of all server revenue in the fourth quarter.

Jean S. Bozman, Research Vice President in IDC's Enterprise Platforms Group attributed the System z growth to several factors, including “technology refresh, new products such as zEnterprise, new accounts in emerging economies, and consolidation of some enterprise Linux workloads onto IBM System z, using the Integrated Facility for Linux (IFL) specialty engines. Although revenue results for System z are traditionally heavier in the fourth quarter, this accelerated acquisition shows the breadth and depth of the IBM mainframe installed base."

And then there's Cisco Systems, the networking giant which entered the server market in 2009. This was the first quarter that Cisco maintained a position in the top 5 server rankings for IDC. Of Gartner’s top five vendors in server shipments worldwide, Cisco was the only vendor to experience an increase in shipments in the fourth quarter of 2012. Cisco’s worldwide server shipments increased 40.9 percent in the quarter.