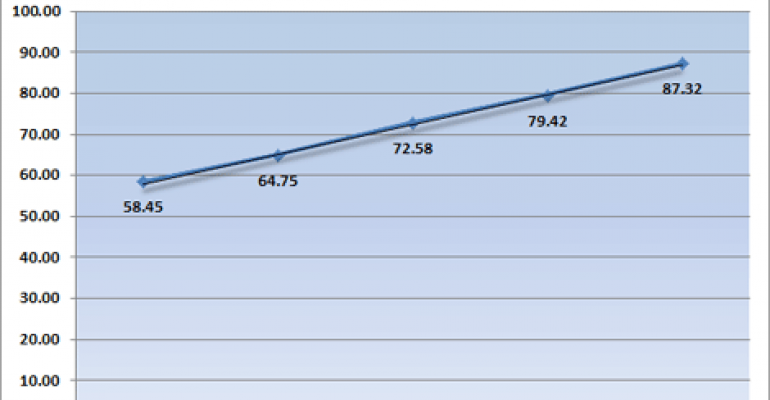 Shares of Rackspace Hosting are down nearly 20 percent in afternoon trading after the company's earnings raised concerns that the rate of adoption for cloud computing services may be moderating. The slide reflects Wall Street's high expectations for Rackspace, which saw its shares rise 72 percent in 2012 amid investor enthusiasm for cloud computing. 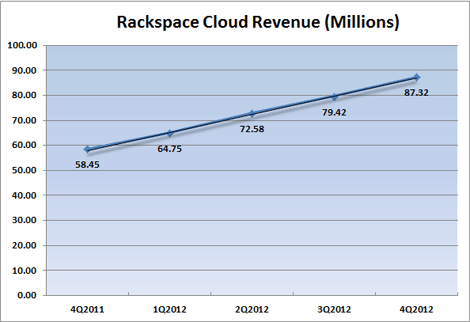 Shares of Rackspace Hosting dropped nearly 20 percent today after the company's earnings raised concerns that the rate of adoption for cloud computing services may be moderating. Shares of RAX were down $14.80 to $60.30, a drop of 19.6 percent on the session. The slide reflects Wall Street's high expectations for Rackspace, which saw its shares rise 72 percent in 2012 amid investor enthusiasm for cloud computing.

Rackspace said sales of cloud services rose to $87.3 million in the fourth quarter of 2012, up 49 percent from the year-earlier quarter. While a strong gain , that represented a decline from previous year-on-year cloud gains of 69 percent in the second quarter and 57 percent in the third quarter. Rackspace's overall earnings of 21 cents per share was in line with analysts' estimates, but revenue of $353 million for the quarter missed analysts' average estimate of $355.4 million.

The company released its earning after the market closed Tuesday, and discussed them in an after-hours conference call with analysts. After the call, Stifel Nicolaus downgraded Rackspace's shares, citing the revenue growth outlook for 2013. Other analysts also cited concerns that revenue growth may fall short of expectations.

"Clearly, growth is slowing. That's probably the primary driver as to why the stock is off so much," Stephens Inc. analyst Barry McCarver told Reuters.

Rackspace CEO Lanham Napier described 2012 as a year of "execution and rebuilding, a year spent in the lab."

"Accelerated growth isn't something that happens overnight or guaranteed to be linear given the variable on-demand nature of the cloud," said Napier. "In the fourth quarter, we were pleased to see cloud growth accelerate. We are getting pilot projects with enterprise customers and these projects come before revenue."

Rackspace announced that office retailer Staples is using its new Open Cloud platform based on Open Stack, which was deployed in October.

"This project was one of the most difficult, exciting and strategic challenges that our company has very pursued," said Napier. "It was the largest product investment the company's ever made and we believe it has tremendously improved the technical capabilities of our offering."

Napier remained enthusiastic about the "transformational" growth potential for cloud computing. "We believe the economics of the cloud will drive an explosion of new demand for computing, just as the proliferation of smartphones has driven explosive demand for new applications," said Napier.

As we've seen today, on Wall Street those projections reside on a double-edged sword, and hot stocks face a narrow boundary separating enthusiasm and disappointment.