ll new servers added to the Rackspace Cloud will run on Open Compute hardware, the company said yesterday. The announcement at yesterday's Open Compute Summit marked one of the largest commitments to hardware designs based on the Open Compute Project. 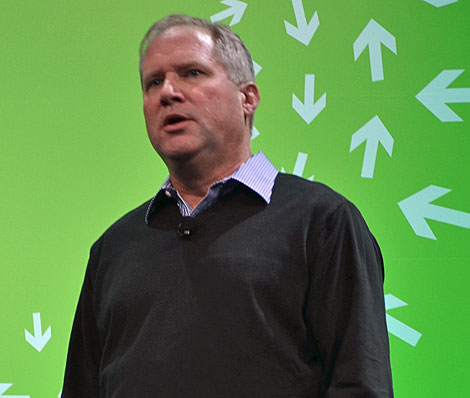 Mark Roenigk, COO, Rackspace, shared how Rackspace based its new infrastructure on Open Compute standards and that it will be moving all its cloud infrastructure to OCP compliant hardware this spring. (Photo by Colleen Miller.)

SANTA CLARA, Calif. - From this point forward, all new servers added to the Rackspace Cloud will run on Open Compute hardware, the company said yesterday. The announcement at yesterday's Open Compute Summit marked one of the largest commitments to hardware designs based on the Open Compute Project.

"Every expansion for our cloud business will be 100 percent Open Compute hardware," Rackspace chief operating officer Mark Roegnik said in an interview with Data Center Knowledge.

That deployment will begin this spring, when Rackspace will install its Open Compute servers in a new data center in Ashburn, Virginia that has 6.2 megawatts of IT capacity. The servers will reside in a modified version of the Open Rack, which is wider than traditional racks.

"I believe we're going to fill it up fast, all 6 megawatts," said Roegnik. "It will take the load off of other data centers where we're straining our capacity. When we move to this new platform, we can point every new customer there."

Rackspace is one of the largest providers of cloud computing services, and spends more than $200 million a year on servers and storage. A significant chunk of that will shift from previous suppliers Dell and HP to Quanta and Wistron, two Taiwan-based firms that build custom servers based on Open Compute designs.

Last May, we outlined Rackspace's plans to use designs from the Open Compute Project to reduce its hardware costs costs on servers and operations. The company has spent the last year developing servers and racks based on Open Compute designs, including servers from Quanta and Wiwynn (Wistron's U.S. business) and a version of the Open Rack built by Delta, another Taiwan firm.

Rackspace's new hardware design will require some slight modifications from the landlord of its Virginia data center, DuPont Fabros Technology.  The electrical distribution, which is typically routed below a raised-floor, will be shifted to overhead trays. Running power overhead gives Rackspace more flexibility in where it places equipment in its data center, a consideration driven by the need for flexibility in the future path of the company's storage hardware.