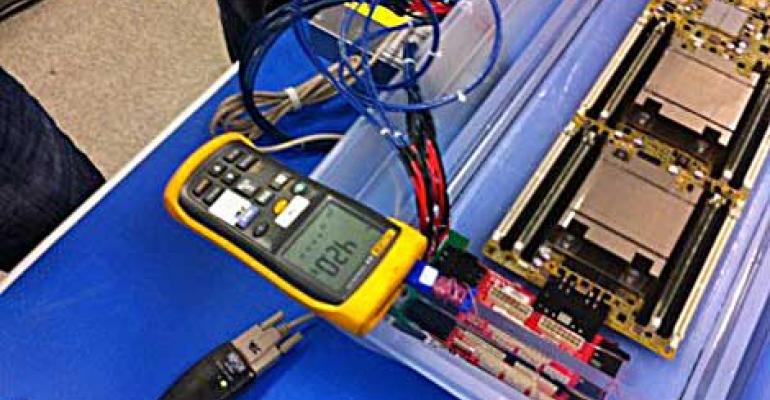 Will submerged servers come to Facebook? The social network is the latest company to conduct tests in which servers are submerged in dielectric fluid. 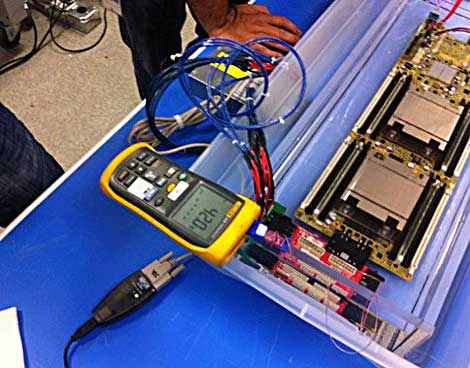 Facebook engineers immerse one of the company's servers in dielectric fluid in a recent test. (Photo: Facebook)

Will submerged servers come to Facebook? The social network is the latest company to conduct tests in which servers are submerged in dielectric fluid. Facebook engineers Tin Tse and Veerendra Mulay put together an "infrastructure hack" to test an immersion cooling method in which they submerged one of the company's recent server designs in mineral oil and turned it on.

The liquid cooling test was included in a roundup of the Facebook engineering team's favorite hacks from 2012. " The test was successful; we were able to run the server at temperatures above 110 degrees Farenheit," the engineering team reported.

There's no indication that Facebook is ready to convert its data centers to immersion cooling, a technique that its advocates claim can produce large savings on infrastructure, allowing users to operate servers without a raised floor, computer room air conditioning (CRAC) units or chillers. But 2012 was a year of progress for "swimming servers" and other liquid cooling techniques. Here's a recap:

Intel Embraces Submerging Servers in Oil: Intel has just concluded a year-long test with immersion cooling equipment from Green Revolution Cooling, and affirmed that the technology is highly efficient and safe for servers. The testing, conducted at an Intel data center in New Mexico, may mark a turning point in market readiness for submerged servers, if recent experience with Intel’s embrace of emerging data center designs is any indication. “We continue to explore server designs, and we’re evaluating how (immersion cooling) can change the way data centers are designed and operated,” said Mike Patterson, senior power and thermal architect at Intel. ”It’s obviously quite a change in mindset.”

3M Demos New Immersion Cooling Technique: 3M demonstrated a data center cooling concept called “open bath immersion cooling,” which it says is simpler and less expensive to implement than other pumped liquid cooling techniques. The system is an example of passive two-phase cooling, which uses a boiling liquid to remove heat from a surface and then condenses the liquid for reuse, all without a pump. The servers are immersed in 3M’s Novec, a non-conductive chemical with a very low boiling point, which easily condenses from gas back to liquid. Each processor is capped with a copper plate coated with a material that enhances boiling, improving the efficiency of the heat transfer. The vapor generated by the boiling Novec rises to a condenser integrated into the tank and cooled by waters, and then condenses back to liquid for reuse.

Closer Look: Iceotope Liquid Cooling: Iceotope describes its solution as “free cooling anywhere.” It encapsulates servers in heat pipe modules containing 3M’s Novec fluid as its heat removal medium. Each server motherboard is completely immersed in a sealed bath of liquid coolant which passively transfers heat away from the electronics to a heat exchanger formed by the wall of the module, where water is continuously re-circulated and cooled. The company says the system can work with water supplies of up to 50 degrees C and still keep servers cool.

Hardcore Becomes LiquidCool, Eyes Server Market: In July, Hardcore Computer retooled its business to focus on licensing its liquid cooling technologies for servers and high performance computing. As part of that shift, the company is changing its name to LiquidCool Solutions and will discontinue manufacturing PCs, workstations and servers.
Hardcore, best known in the data center sector for its Liquid Blade immersion cooling system, has adopted a contract manufacturing model, with research and development and prototype work still done in house. The company plans to license its technology and intellectual property to server makers, with an eye toward other markets down the road.

U.S. Defense Department to Cool Servers With Hot Water: The U.S. Department of Defense (DoD) will soon begin cooling its servers with hot water. The DoD said this week that it will convert one of its data centers to use a liquid cooling system from Asetek Inc. The move could clear the way for broader use of liquid cooling in high-density server deployments at the DoD, which says it will carefully track the efficiency and cost savings from the project.

Hot Water Cooling? Three Projects Making it Work: The phrase “hot water cooling” seems like an oxymoron. How can hot water possibly help cool servers in high-density data centers? Although the data center community has become conditioned to think of temperatures between 60 and 75 degrees as the proper climate for a server room, there are many ways to keep equipment running smoothly with cooling technologies featuring significantly higher temperatures. There are three recent examples of this trend.