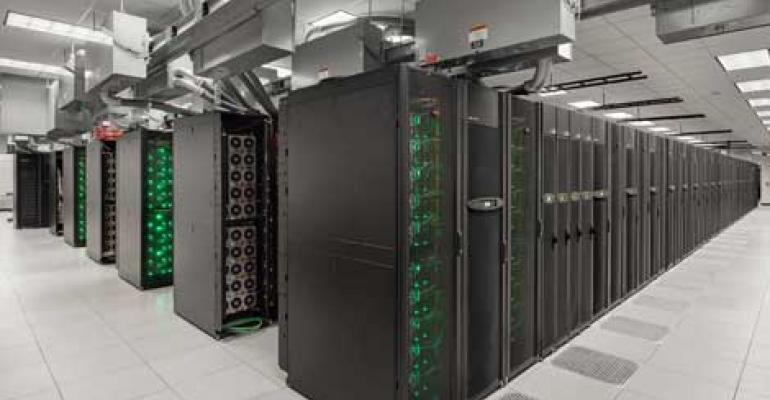 The Weeh in Review: Inside Facebook's North Carolina data centers, a closer look at the Stampede supercomputer, modules beat the heat at 130 degrees, Twitter keeps growing.

The Stampede supercomputer is housed in nearly 200 cabinets in a new data center at the Texas Advanced Computing center in Austin. The syystem was featured in a keynote at the Gartner Data Center Conference. (Photo: TACC)

Video: Facebook's Next-Generation Servers - Last week Data Center Knowledge got a tour of Facebook’s North Carolina campus. In this video, Keven McCammon from the Facebook data center operations team takes us into the data halls of both buildings in Rutherford County to show us how the designs have evolved. For additional coverage, see Inside Facebook's NC Data Center Campus and The Evolution of Facebook's Cooling.

Stampede Supercomputer Beefs Up With Phi Coprocessors - At the Texas Advanced Computing Center, Phi is enabling a Stampede of data. The TACC is in the process of launching Stampede, the seventh-fastest supercomputer in the world. Much of that horsepower is provided by Intel’s new Xeon Phi coprocessor. The Stampede system spans nearly 200 cabinets at the TACC facility in Austin, Texas. The system was showcased this week in a keynote presentation at the Gartner Data Center Conference in Las Vegas, cited as an example of the future path for high performance computing (HPC).

Gartner: Complexity is IT's Big Problem. Talented Staff is the Answer - IT environments are becoming more and more complex, requiring data centers to support more technologies and devices. Mastering this growing complexity is perhaps the greatest challenge faced by enterprise IT, analysts from Gartner said yesterday. What’s the solution? Hiring talented staff and enabling them to thrive. The critical role of skilled employees in taming complexity ran through several presentations yesterday at the annual Gartner Data Center Conference in Las Vegas.

Report: Twitter Expanding in Atlanta - Back in September 2011 we reported that Twitter was leasing a big chunk of space in an enormous data center operated by QTS (Quality Technology Services) in downtown Atlanta, with the option to expand as it grows. It looks like the micro-blogging service is invoking that option and adding 100,000 square feet of space at the Metro Technology Center, owned by QTS, in downtown Atlanta.

AST Modules Beat the Heat in the Iraq Desert - It’s one thing to design modular data centers that perform well in the cool climates of Iceland. It’s another matter to build a module that can operate at 130 degrees F (55 degrees C) in the summer heat of the Iraq desert. One company that has accomplished both tasks is AST Modular, a Barcelona-based company that specializes in modular data centers.