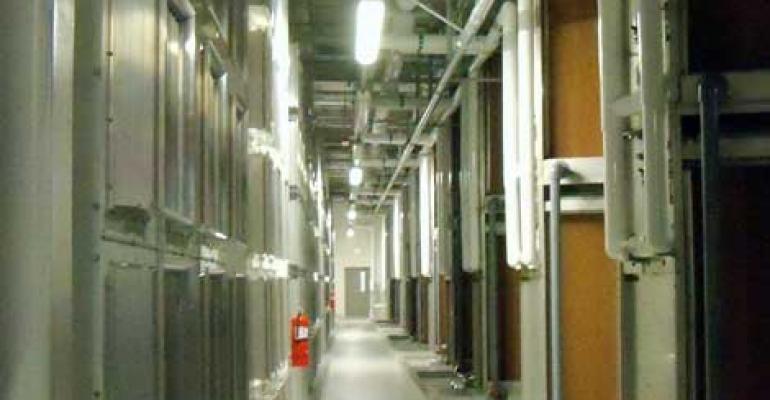 Facebook is making some changes in a phase of its fresh air cooling system that manages humidity and heat removal. The Facebook's data center team provided a walk through the company's two data centers in North Carolina to illustrate the differences between the old and new systems. 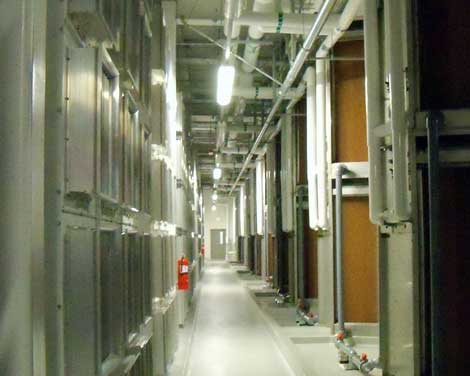 A look at one of the cooling chambers in Facebook's latest data center in North Carolina. At right are the media panels that cool the air as it passes through the facility's second story "penthouse" cooling channel. Water flows across the media, allowing for an evaporative cooling process. At left are louvers that control airflow into the fan wall that guides air into the low-level server rooms. (Photo: Rich Miller)

FOREST CITY, N.C. - How do you improve a system that can keep servers cool using only fresh air on a 102-degree day? If you're the data center team at Facebook, you continue to refine your design, seeking every opportunity to further optimize your systems.

Facebook is making changes in a phase of its fresh air cooling system that manages humidity and heat removal. In the first building of its  data center campus in North Carolina, Facebook used a misting system, with small nozzles attached to water pipes that sprayed a fine mist across the air pathway, cooling the air and adding humidity.

That helped the Rutherford County facility maintain extreme efficiency during an extremely hot summer in which temperatures peaked at 102 degrees, recording a Power Usage Effectiveness of 1.07 as it relied solely on fresh air cooling.

In the second data center on its North Carolina campus, Facebook has replaced the misters with an evaporative cooling system featuring adiabatic media. Warm air enters through the media, which is dampened by a small flow of water that enters at the top and flows down the membrane. The air is cooled as it passes through the wet media.

Facebook discussed this new approach with Data Center Knowledge earlier this year. During our recent visit to the Rutherford County campus, Facebook's James Faccone and Keven McCammon provided a walk through the company's two data centers, illustrating the differences between the old and new systems. This video runs about 5 minutes.

In its first data center in Prineville, Facebook had an entire room dedicated to reverse osmosis, a natural process that separates small particles and impurities from water. The media serves a similar process (unlike misting), allowing Facebook to save construction costs by foregoing reverse osmosis.

Facebook’s data center design uses a two-tier structure, which separates the servers and cooling infrastructure and allows for maximum use of floor space for servers. Facebook uses the top half of the facility to manage the cooling supply, so that cool air enters the server room from overhead, taking advantage of the natural tendency for cold air to fall and hot air to rise – which eliminates the need to use air pressure to force cool air up through a raised floor.

The air enters the facility through an air grill in the second-floor “penthouse,” with louvers regulating the volume of air. The air passes through a mixing room, where cold outdoor air can be mixed with server exhaust heat to regulate the temperature. The cool air then passes through a series of air filters and the evaporative media, continues through another filter to absorb the moisture, and then through a fan wall that pushes the air through openings in the floor that serve as an air shaft leading into the server area.