Dramatic growth in data center throughput has led to the increasing usage and demand for higher-performance servers, storage and interconnects. As a result, we are seeing the expansion of higher speed Ethernet solutions, specifically 10 and 40 gigabit Ethernet, writes Bjorn Baera of Mellanox.

Bjorn Baera is Sr. Marketing Manager for Mellanox Technologies, and is responsible for products that are used for high-throughput, low-latency server and storage interconnect in data centers. You can find him on LinkedIn.

Dramatic growth in data center throughput has led to the increasing usage and demand for higher-performance servers, storage and interconnects.  As a result, we are seeing the expansion of higher speed Ethernet solutions, specifically 10 and 40 gigabit Ethernet.

In particular to 10 gigabit Ethernet (10GbE), IT managers are now faced with the challenge of selecting the appropriate 10-gigabit physical media, as 10GbE is offered in two broad categories: optical and copper.

The main challenge IT managers face when selecting a new cable solution is the ability to support current and future data center deployments and trends::

When planning a new cluster cabling, IT managers are faced with the challenge of future proofing their investment, as well as the predicting  future application requirements.

When planning a future cable infrastructure, it is important to make sure that the physical infrastructure will support future application needs, and future technology roadmaps. IT or the data center managers prefer to avoid installing multiple cable infrastructures for separate application traffic requirements – such as High Speed CPU-to-CPU communication using 40Gbps Infiniband and Storage and Internet connectivity using 10Gbps Ethernet.

IO consolidation, which is critical to reducing data center capital and operational costs, mandates that the cable infrastructure support new dynamics and challenges.

Comparing the 10GBase-T and SFP+ Options

Many IT managers are now evaluating the newly refreshed 10GBase-T technology, as the perception is that 10GBase-T is cheaper and easier to deploy than the alternative SFP+ technologies. The following table compares these two technologies:

When it comes to 10GBase-T, the PHY standard uses block encoding to transport data across the cable without errors. The block encoding requires a block of data to be read into the transmitter PHY, a mathematical function run on the data before the encoded data are sent over the link. The reverse happens on the receiver side. The standard specifies 2.6 microseconds for the transmit-receive pair, and the size of the block requires that latency to be less that 2 microseconds. SFP+ uses simplified electronics without encoding, and typical latency is around 300 nanoseconds (ns) per link.

Two microseconds may not seem high at first; however, if we imagine a TOR infrastructure where traffic is passing 4 hops to reach the destination, as much as 10.4usec delay is introduced when using 10GBase-T. This is a significant performance penalty compared to using 1.2usec introduced by the SFP+ DAC technology.   For each technology, the latency of physical media must be added. In fiber or wire, the speed is roughly 5ns per meter.

As power grid companies cap power supplies to data centers, IT managers have become sensitive to server power consumption. Data center managers aspire for the lowest possible power consumption technologies. It is important to note that for every watt of power consumed, typically two additional watts are needed for cooling.

10GBase-T components today require anywhere from 2 to 5 watts per port at each end of the cable --depending on the distance of the cable --while SFP+ requires approximately 0.7 watt, regardless of distance. 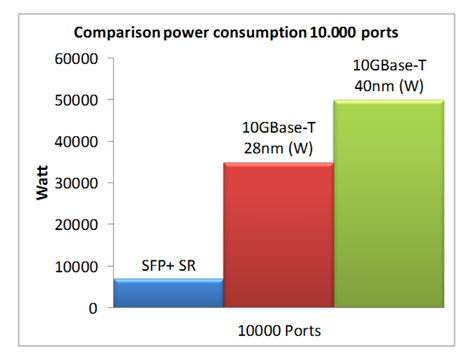 When deploying thousands of cables in a data center, huge power saving can be achieved by choosing SFP+ DAC and fiber technology.

When planning for new data center cable infrastructures, new dynamics must to be considered:

New dynamics within data centers mandate that the cable infrastructure handles latency sensitive applications anywhere.  When comparing 10GBase-T technology with the alternative SFP+ technology, it is evident that SFP+ is the right technology to ensure optimal performance with lowest latency in the data center.

SFP+ technology delivers far lower power usage than the 10GBase-T technology. The cost saving becomes obvious when deploying from 1000 to 10,000 cables in the data center.