Data Center Efficiency: The Past and the Future

In the last few years, focus by the data center industry has brought about substantial gains in efficiency. These improvements range from infrastructure to fundamental improvements in computing efficiency, writes Winston Saunders of Intel. What lies ahead for the efficiency-seeking industry?

It’s been an exciting ride. In the last few years, focus by the data center industry has brought about substantial gains in efficiency. These improvements range from infrastructure to fundamental improvements in computing efficiency.

I’ll have the privilege of co-presenting with my colleague Deva Bodas on this subject at the upcoming 7X24 Exchange Conference being held in Phoenix this week. The improvements, which we’ll argue are well over a factor of 20, are revolutionary and are a fundamental driver of our digital economy.

Back in 2003, Deva, then one of the few already thinking deeply about efficiency, presented some ideas that were, at the time, radical. The notion that servers whose power consumption remained high when application load was low were inefficient and the notion that stranded power sub-optimized data center work output were just beginning to be recognized. 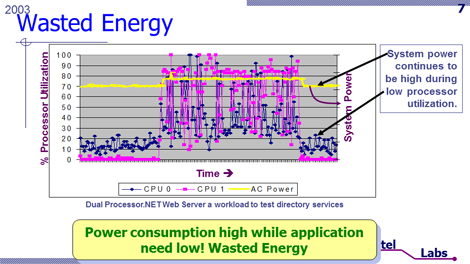 Since then, there has been a lot of innovation. In our talk we’ll cover a lot of ground, from the advent of the technological roots of Intel Node Manager to the evolution of server efficiency toward ideally proportional energy use with workload. We’ll show how actively provisioning resources in the data center can dramatically increase capability without incurring additional capital expense. 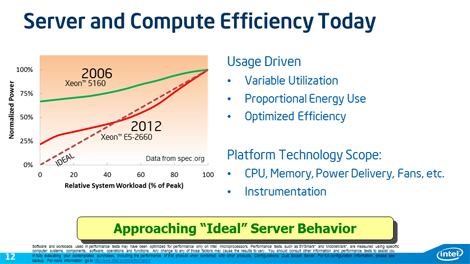 And we will talk about the substantial gains made across the industry in terms of infrastructure efficiency, improvements in power delivery, and progress with Government in defining efficiency standards.

Our talk wouldn’t be complete without some risk taking. So we will venture some guesses about what the future of efficient compute will hold, not only in terms of hardware capability, but the intelligence that will need to be built behind the hardware to manage workloads and capabilities autonomously while maintaining awareness of the specific workload being processed. 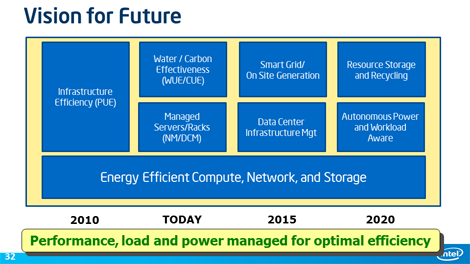 The last few years have been full of discovery and excitement. In our opinion the next few years hold even greater challenge and opportunity. I encourage you to attend our talk at the 7X24 Exchange Conference. See you there!