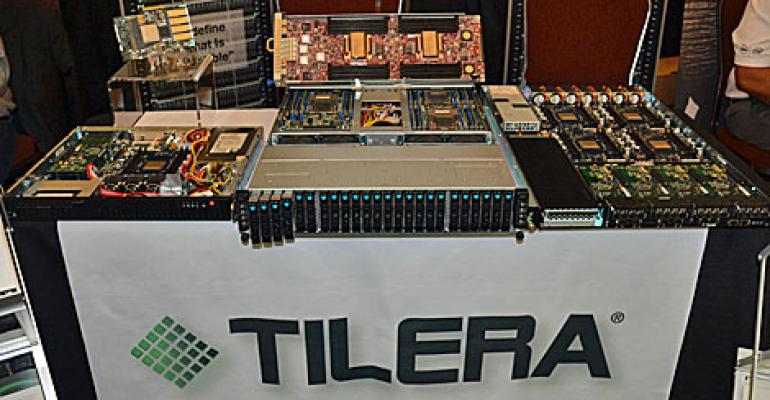 As it rolls out new products, Tilera is feeling strong about its position in the many-core server market, with a growing customer base and a strategic relationship with a major emerging player in the server ecosystem. 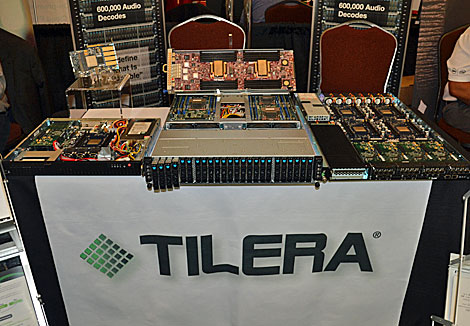 Tilera's server hardware, including the S2Q server built by Quanta, on display at a recent industry conference (Photo: Colleen Miller)

As the world's largest companies seek to slash the electric bills to power their vast armadas of servers, they are assessing the progress of next-generation server specialists adapting many-core designs. The team at Tilera is feeling strong about its position in the many-core market, with a growing customer base and a strategic relationship with a major emerging player in the server market.

This week Tilera introduced the TILE-Gx9, a 9-core processor targeted at improving performance-per-watt for 64-bit applications in networking, multimedia and storage. In addition to the nine processor cores, the device integrates a high-performance memory controller, Ethernet and PCI Express interfaces, and available crypto and compression engines to reduce both system cost and circuit board area.

"We are seeing enormous market traction and design win activity with our 16 and 36-core TILE-Gx processors, unseating embedded processors and other difficult-to-program devices," said Devesh Garg, president and CEO at Tilera. "Customers need unprecedented levels of performance and performance-per-watt to stay competitive and they simultaneously want to reuse their software and hardware investments across their product portfolio. The TILE-Gx9 brings all of Tilera’s advantages of performance, power-efficiency and thousands of open source libraries to our customers in an exceptional power envelope of only 10 watts."

Tilera uses an architecture that eliminates the on-chip bus interconnect, a centralized intersection where information flows between processor cores or between cores and the memory and I/O. Instead, Tilera employs an on-chip mesh network to interconnect cores.

Facebook and other huge data center operators are increasingly driving demand in the server market, and are looking beyond the x86 architecture that has traditionally dominated data center computing.

"The trends we are seeing are driven by the requirements of large customers," Garg said in a recent conversation with Data Center Knowledge. He said large users are focused on finding the best compute performance per watt split across dozens and even hundreds of cores. "I think these trend lines will stay in place and continue to accelerate."

Performance per Watt as Differentiator

"Everybody is looking at TCO (total cost of ownership) in one form or another, at the Capex and Opex level," said Garg. "Performance is important, but performance per watt is my priority."

Tilera currently has more than 100 active customers, with many using its servers in production, said Garg. Tilera has a useful ally in Taiwan's Quanta Computer, which is an investor in Tilera and builds the company's S2Q server. Quanta is also emerging as a key player in the market for custom cloud servers, and is rumored to be a source for hardware at Google, eBay and Amazon

Tilera is part of an emerging ecosystem of companies seeking to harnesses thousands of low-power cores that work together on computing tasks, a group that includes Calxeda and SeaMicro, now part of AMD. Garg says he likes Tilera's competitive position versus its many-core rivals.

"There are a lot of people that are out there making noise," said Garg. "Talk is cheap. The people who win will have to distinguish themselves by performance per watt and cost versus the x86 market."