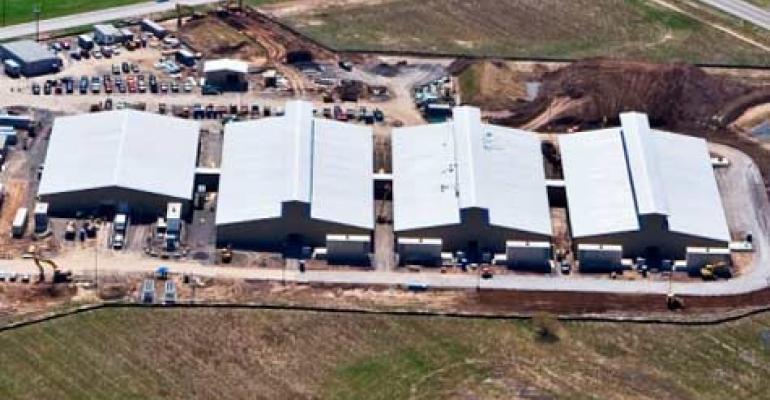 An aerial view of the Yahoo data center in Lockport, N.Y.
Companies>Yahoo

Is the server-filled "chicken coop" ready to expand? Yahoo will purchase an additional 14 acres of land in an industrial park next to its existing data center in Lockport, New York, according to local media.

An aerial view of the Yahoo data center in Lockport, N.Y.

Is the server-filled "chicken coop" ready to expand? Yahoo will purchase an additional 14 acres of land in an industrial park next to its existing data center in Lockport, New York, according to local media.

The Yahoo Lockport facility, which is optimized for air-cooling, is one of the world's most efficient data centers, operating with a Power Usage Effectiveness (PUE) of 1.08. The data center, which is supported by hydro-electric power, requires mechanical cooling for a handful of hours each year.

Lockport economic development official David Kinyon said the Internet company will pay $15,000 an acre for the land, the same price it paid when it bought its original 30 acres, but said the company hasn't indicated how or when it will use the property.

Early last year Yahoo announced plans to invest an additional $500 million in data center infrastructure, and initiative that was slated to include additional phases at its existing data center campuses. It's not clear how that plan has been impacted by changes at Yahoo, which include a new CEO (Marissa Mayer).

The first two phases of the Lockport project, built in 2010 and 2011, featured 275,000 square feet of data center space housed in five 120-by-60 foot prefabricated metal structures using the Yahoo Computing Coop data center design. The coops -modeled on the thermal design of chicken coops- have louvers built into the side  to allow cool air to enter the computing area. The air then flows through two rows of cabinets and into a contained center hot aisle, which has a chimney on top. The chimney directs the waste heat into the top of the facility, where it can either be recirculated or vented through the cupola. See A Closer Look at Yahoo’s New Data Center for more photos and video.