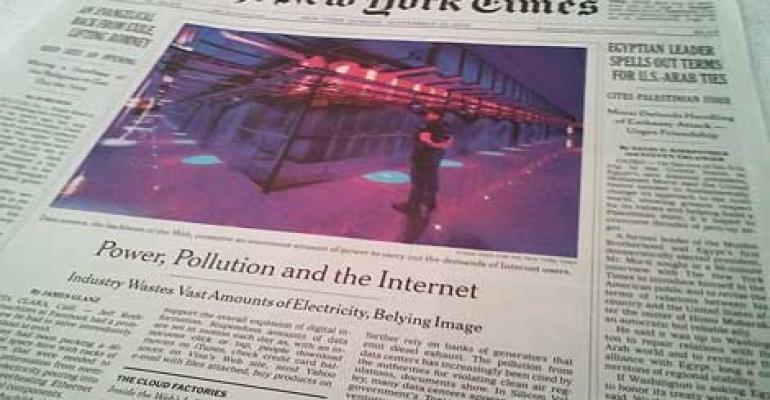 Here's one thing you can say about the New York Times' series on data centers and energy: it has the industry talking like never before about its successes and its shortcomings. Here's a roundup of some of the notable commentary on the Data Center Blogs. 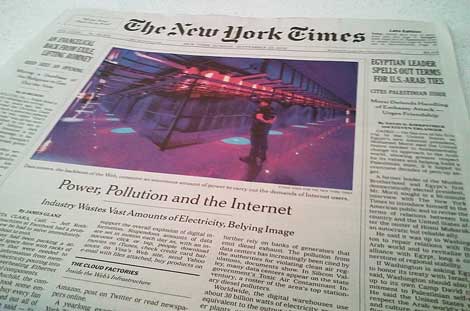 Here's one thing you can definitely say about the New York Times' series on data centers and energy: it has the industry talking like never before about  its successes and its shortcomings in energy efficiency. Here's a roundup of some of the notable commentary from last week on the Data Center Blogs:

Has the New York Times Got a Point About Data Center Waste? - At the Schneider Electric blog, Soeren Brogaard Jensen discusses using expensive infrastructure as a reliability cushion: "Here’s a point I think we can all agree upon. For years the industry has over-provisioned because the need for availability has always outweighed the desire to be inefficient. An acceptable fact or not, all the time the industry was foundling, it wasn’t an interesting problem for journalists to expose."

Riposte to Forbes Critique - Utility consultant Mark Bramfitt says the Times was on the mark about one issue: utilization. "The highest utilization rate I've ever heard was from a search company (not for attribution) who said they were running in the low thirties. A major e-tailer claimed mid twenties. And yes, enterprise users are in that oft-cited 6 to 14 % range. ... Yes virtualization can improve utilization, but implementation of true power management technology is dismally low in data centers of all stripes. Tackling this will I think be the next major area of focus for the industry."

A Punch in the Face - Chris Crosby at Compass Datacenters has written a three-part series of blog posts reflecting on the NYT series. "Just like in any 12-step program the first step in fixing a problem is admitting that you have a problem ... And we do. Not as malicious or secretive as the picture the Times’ attempts to portray, but a hard set of problems in a young industry. Despite all we have learned, some still build huge monolithic sites all at once without using an incremental approach to populating and powering them" Also check out the second and third installments.

Datacenters Destroy Civilization and Your Dog is Ugly - Larry Vertal writes at DataCenterDynamics: "Reaction to the articles from the industry has been strong and generally civil, with most of what could be viewed as snarky being attempts at humor. After all it didn’t really say that datacenters destroy civilization and your dog is ugly. At the risk of brickbats in my direction, in terms of the broad sweep of the articles with respect to the industry, I am more sympathetic than most. This is because I feel the industry in general has made itself hugely vulnerable to such assessments from those outside the club."

Dams, Trash and Cash: The Impending Collapse of Disposable IT Economics - The Uptime's Institute's Julian Kudritzki looks at IT economics and their role in efficiency: "Many data centers are inherently wasteful due to the governing (mis)economics of cheap, high-availability computing. As long as IT reaps economic benefits divorced of true costs, then discipline in server procurement, utilization, and data center management is a ways off. These favorable economic conditions delay motivation to change, but once dissipated, will transform our industry’s characteristics."

For additional perspectives, see Welcoming the EnergyDebate and Telling Our Story from Fortune CEO John Sheputis,  our initial take (The New York Times Blasts 'Cloud Factories' on Energy Use)  and our earlier roundups of industry reaction (Roundup: Reactions to the New York Times and NY Times: The Reactions Continue) .