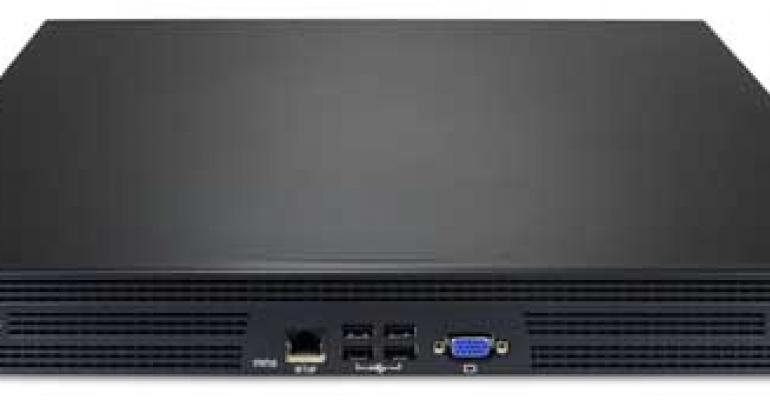 Joyent Uses Trellis to Peer Into App Power Use

A new partnership between Joyent and Emerson Network Power is providing a more granular picture of the entire power path, providing deeper insights into the power used by indvidual applications.

The Avocent Universal Management Gateway, part of the Trellis DCIM platform from Emerson Network Power. Joyent has integrated Trellis into its SmartDatacenter platform, allowing end-to-end insight into energy use.

Tracking power usage in the data center has meant monitoring hardware, such as servers, storage devices. A new partnership between Joyent and Emerson Network Power is providing a more granular picture of the entire power path, providing deeper insights into the power used by indvidual applications.

Joyent said this week that it is integrating its cloud computing platform with Trellis, Emerson's data center infrastructure management (DCIM) software suite.  Since the two companies’ software suites address  different aspects of the data center stack – Joyent’s Smart Datacenter manages instances and compute workloads, while Emerson’s Trellis looks at power and equipment – the integration  allows Joyent  to see the full power path of an applications, from “watt to workload.”

“We selected Emerson as our partner because the Trellis platform is the only DCIM solution available today that can provide holistic, real-time visibility from service processor to power grid and enable the dynamic optimization of data center physical resources,” said Jason Hoffman, founder and CTO of Joyent. “Our partnership will enable us to offer a unique, tightly integrated, modular, highly efficient solution that optimizes the entire infrastructure based on the energy consumption of application workloads.”

The Trellis approach spans hardware and software, and hopes to span the gap between IT and facilities departments.  The hardware component, a 1U appliance known as the Universal Management Gateway (UMG), is a 1U rackmount device that  serves as a “universal translator” for data from a wide range of devices.

Built partially with Joyent’s Node.js runtime, the Trellis platform runs on the Joyent cloud today. With its integration with Trellis, Joyent will be able to track the energy consumption of virtual workloads and the impact each virtual workload has on the physical infrastructure - providing complete visibility into their entire cloud from the grid up.

"The knowledge of the power chain allows you to correlate applications to power, and not just hardware to power," said Steve Hassell, president of the Avocent business of Emerson Network Power. "It allows (Joyent) to better place their workloads within their infrastructure, and calculate chargebacks to users based on actual usage.You can start to identify applications that are using more energy than they otherwise might. Then you can ask if there’s a way to rewrite or tune those applications."

These capabilities will allow Joyent to fine-tune its environment to further improve the power efficiency of its platform. The relationship also provides some benefits for Emerson.

"In the cloud environment, there’s a attitude toward innovation," Hassell continued. "We really felt we wanted to be able to play in both spaces, and needed a bridge into (the cloud sector). And Joyent provides us with that."

Since Joyent sells both hosted and on-premise cloud capacity for customers, it also serves as a channel partner for Emerson and Trellis. Emerson believes Joyent's cloud offering, with its focus on high peformance, will only become more compelling over time.

"Jason is pretty far-sighted on this," said Hassell. "He’s looking forward to the day when you can move workloads seamlessly across clouds. At that point, the price of capacity is going to plummet. The margin for those cloud providers will get compressed, and the ability to shave fractions (of power use) will be the difference between the winners and losers."