The OpenStack Foundation officially launched today and began by hiring Jonathan Bryce, co-founder of the Rackspace Cloud, as its Executive Director. Through member dues and corporate sponsorships, OpenStack has secured more than $10 million in funding commitments as of September.

The OpenStack Foundation, announced last year, is right on time with its official launch in September, prior to its next OS release and its conference in San Diego next month.

The OpenStack Foundation officially launched today, just two short years after the first release of the open source cloud OS OpenStack. Through member dues and corporate sponsorships, OpenStack has secured more than $10 million in funding commitments as of September, and has begun hiring staff.

“It’s the next phase of the project,” said Jonathan Bryce, who serves on the OpenStack Project Policy Board and was co-founder of Rackspace Cloud. Bryce will leave his full-time job at Rackspace and take the helm of the foundation as Executive Director. The foundation will serve as a home-base for governing OpenStack projects and the community itself, helping to share resources and assets across the community, and managing developers, users and ecosystems.

The foundation plans to hire 10 to 12 staff members, who will be distributed around the globe, to continue to grow and support the OpenStack community and nurture the ecosystem of software providers who are building on the OpenStack platform. Additionally, the foundation has elected a full complement of 24 board members, representing three classes of membership in the foundation – platinum, gold and individual.

“Since the announcement, we’ve developed the mission, got funding, grew the community of developers building software, and went through the creation of the appropriate legal documents,” Bryce said.

Lew Moorman, president of Rackspace, noted that the foundation was in the plans from the start. "Today, we are proud to finalize the process by donating the assets, handing over community management and giving the OpenStack trademark to the OpenStack Foundation.  As a driving force behind OpenStack, Rackspace helped grow the community to where it is today and now with the amazing support from more than 190 member companies, the Foundation is now ready to take flight," he said. "As a member of the board, we look forward to working with the other members to continue building OpenStack to be the de facto standard open source software for public and private clouds."

Other participants weighed in as well.

“Today’s announcement isn’t just  a big milestone for the OpenStack community, but is a milestone for the open source industry as a whole. The long-term impact of OpenStack on the entire IT industry cannot be overestimated,"  said Boris Renski, co-founder of Mirantis and OpenStack foundation board member. “We, at Mirantis, feel privileged to be a part of this movement.”

Josh McKenty, co-founder and CEO of Piston Cloud, was involved since the inception. “Over the last two years the OpenStack community has grown at a pace none of us could have predicted when we started the project at NASA and Rackspace. And today the excitement surrounding OpenStack is greater than ever before,” he said. Piston Cloud offers enterprise-class private cloud software based on OpenStack.

During the past year, the interest and involvement in the open source project continues to expand exponentially.  The recent stats released by the foundation include: 5,600 individual members from 88 countries across six continents with the top five countries being the United States, China, India, the United Kingdom and Austraila; 38 global user groups; more than 573 developers have contributed to OpenStack since its inception, with 464 contributing in the last 12 months; and OpenStack software has been downloaded more than 300,000 times from the central code repositories, not counting the various distributions.

Recently, the board approved three more companies to join the project as gold members: VMWare, Intel and NEC. "NEC is a Japanese technology company that is literally 100 years old," Bryce noted. There is a high amount of involvement in OpenStack from Asian companies and developers, including community groups in Bejiing and Shanghai.

Both NEC And VMWare are participating in the open source community. "The value of OpenStack is not only its features of the cloud computing platform, but also openness of the OpenStack Foundation as well as its Open Source development community,”  said Tsugikazu Shibata, Senior Manager, OSS Promotion Center, NEC Corporation.

Mathew Lodge, vice president, cloud services, VMware said, "We are looking forward to building on our existing contributions to OpenStack and customer deployments of this and other open source technologies."

OpenStack Foundation Board to Guide the Effort

The board provides legal and financial oversight of the foundation and is responsible for setting budgets and goals for foundation staff, including the hiring of the Executive Director. The board is made up of 24 total members, including 8 Individual, 8 Gold and 8 Platinum Directors, each of which represents a different class of members. 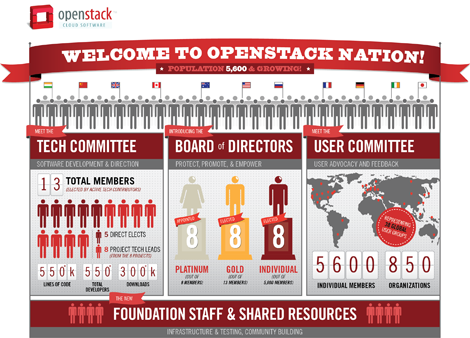 This info graphic shows visually how the community is organized. (Source: OpenStack Foundation.)

Despite the huge growth, Bryce sees the need for more growth and better management. “There are opportunities in the growth of the community," he said. "It's grown so quickly. For example, in 30 days, we’ve had 37 new contributors. So many software projects never make it to that many contributors.”

Looking for improvement in managing this massive group, the leadership is constantly shifting how they put on events, Bryce noted. Additionally, the staff will proactively reach out to software providers to assist them in understanding OpenStack's potential.

With the sixth release of OpenStack, named Folsom, planned for later this month, there will be more features added to the project including Quantum, which is a networking component, and Cinder, which allows for elastic block storage. Also, the community is planning its four-day October summit in San Diego, which draws developers, users, community members and press. Use cases will be presented by Comcast, eBay and Living Social.

(For more information and to register for the conference on October 15-18, see OpenStack Summit website.)