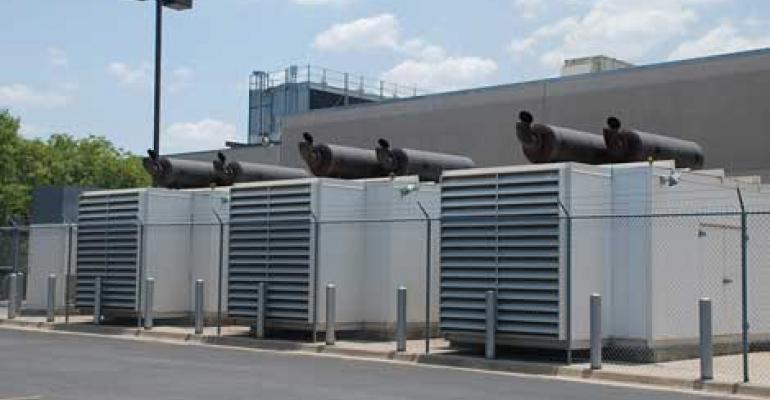 A look at the three 1.5 MW generators supporting the new CoreXchange data center in Dallas.
Companies>Microsoft

Microsoft is the latest company to announce its intention to reduce its use of diesel backup generators. The move is part of a broader initiative to make Microsoft's data centers more sustainable and less reliant on the utility grid. 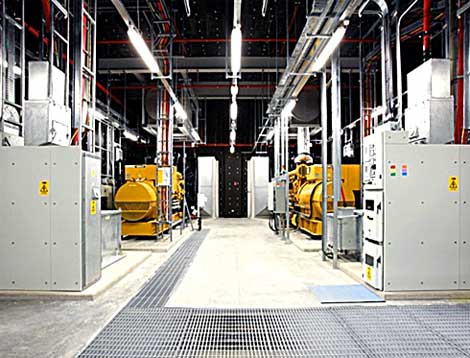 Several diesel backup generators at a Microsoft data center. The company is looking for ways to reduce its reliance on generators. (Image: Microsoft)

For many years, the diesel backup generator has been a symbol of reliability for data centers, providing the emergency power to keep servers online during utility power outages. But the growing focus on using clean energy to power large data centers is prompting some of the industry's largest players to ditch their generators, along with their diesel fuel emissions.

Microsoft is the latest company to announce its intention to reduce its use of diesel generators. The move is part of a broader initiative to make Microsoft's server farms more sustainable and less reliant on the utility grid.

"We are currently exploring alternative backup energy options that would allow us to provide emergency power without the need for diesel generators, which in some cases will mean transitioning to cleaner-burning natural gas and in other cases, eliminating the need for back-up generation altogether," Microsoft Utility Architect Brian Janous wrote in a blog post last week.

The reference to natural gas suggests that Microsoft is preparing to implement fuel cells to replace its generators. That could be good news for Bloom Energy, whose fuel cells will replace generators and UPS units at a new eBay data center in Utah. "Bloom boxes" are also being deployed to provide supplementary power at Apple's iDataCenter in North Carolina.

Generators have been associated with several headaches for Microsoft's data center unit in recent years, including an Azure cloud outage in Europe (when multiple generators didn't start during a utility outage) and a public controversy about whether the diesel emissions from Microsoft's generators in Quincy, Washington could cause health problems for local residents (the state EPA says no).

But Microsoft's motivation to find alternatives to diesel generators is rooted in its commitment to become less dependent on the utility grid, and use renewable energy to power its servers wherever possible. The company says its vision for “data plants” will break new ground in integrating electricity and computing, bring together data centers and renewable power generation.

Microsoft has been exploring the potential for a waste-powered data center that will be built on the site of a water treatment plant or landfill. In his blog post, Janous indicated that Microsoft is evaluating this design at a biomass project in Europe. The company is also looking at a "photovoltaic solar project in the Southwestern U.S."  Microsoft wouldn't provide additional details, but it's worth noting that the company has previously discussed installing a photovoltaic solar array at its data center in San Antonio.

The most intriguing tidbit in this week's disclosures was Microsoft's plans to reduce its need for generators. Diesel engine exhaust is a regulated pollutant, and can be toxic in high concentrations.

"Given the unreliability of the electric grid and the need for continuous availability of cloud services, Microsoft maintains diesel generator backup at all of our data centers, as is typical across the industry," Janous wrote. "Our policy is to use these backup generators only when necessary to help maintain grid stability or in extraordinary repair, and maintenance situations that require us to take our data centers off the power grid. These generators are inefficient and costly to operate. From both an environmental and a cost standpoint, it makes no sense to run our generators more than we absolutely must."

So how do you eliminate generators? In a traditional configuration, data centers use the utility grid for primary power, with UPS units and backup generators providing emergency power in the event of grid outages. Bloom has advanced a power infrastructure design in which Bloom Energy Servers powered by natural gas serve as the primary power source, with the utility grid used as a backup service.

Towards that end, Microsoft is taking steps to position itself to make bulk power deals. "We have recently signed on as an advisory board member with Altenex, an operator of a network that enables member companies to more efficiently engage with developers of renewable energy projects," Janous said. "We expect this engagement with Altenex to improve our ability to identify and evaluate cost-effective clean energy projects."