Even for organizations that use tape to meet legal requirements for archiving, perhaps this anniversary should serve as a reminder that tape – like the rotary phone or snowy TV reception – is a technology whose time has come and gone, writes Bill Hobbib of Exagrid.. Many of those IT teams suffering from restore failures would probably agree.

Bill Hobbib is Vice President of Marketing at ExaGrid Systems, a provider of scalable disk-based backup solutions with data deduplication.

The date was May 21, 1952. The U.S. Social Security Administration was badly in need of a more efficient system that would replace the punch cards used to store records of U.S. citizens.

The year before, the Eckert-Mauchly UNIVAC I had been introduced (playing a key role in the tabulation of 1950 U.S. Census data), and magnetic tape was used to record computer data. However, the reels of tape media on the UNIVAC I were prone to wear and tear.

IBM’s solution to the problem was the IBM 726 magnetic tape reader and recorder. The world’s first tape drive was capable of reading and writing at 12,500 digits per second, with each tape able to store 2 million digits. Some of the tapes were 1,200 feet long. The IBM 726 used vacuum columns, which provided a buffer and made it possible to start and stop at high speeds without damaging the media. It was a major breakthrough, speeding up the process of recording data by 50 times, compared to punch cards. (See our 60 Years of Storage Gallery for photos.)

For context, let's look at what happened in the world that same month -- the “Mr. Potato Head” toy was introduced, the first commercial airline flight took place, and Georgia Gibbs’ “Kiss of Fire” topped the music charts. And red-headed comedienne Lucille Ball was on the cover of TIME magazine.

May 21, 2012 was the 60th anniversary of the IBM 726. In many data centers, while other storage technologies have come and gone, this obsolete, slower performing technology is still being used for data backup and on- or off-site disaster recovery. 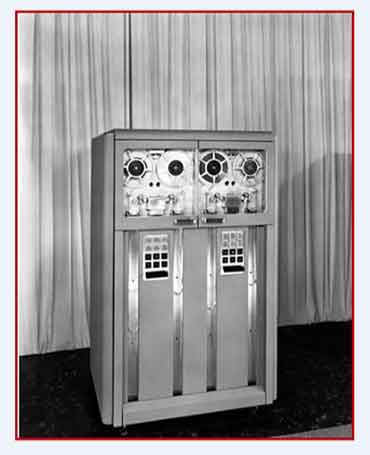 IBM's first tape drive was first deployed in the 1950s. See our 60 Years of Storage Gallery.

To give this anniversary of tape some further perspective, let’s look at some of the technologies that tape sprung from, along with how tape evolved from IBM’s original tape drive.

The precursor technology to tape was punch cards. The textile industry first used punch cards in 1725 to control mechanized textile looms. The first punch card tabulating and sorting machines that could record information were developed by Herman Hollerith, founder of the company that would become IBM, in the late 1880s.

Paper tape was pioneered by the textile industry as a way to send instructions to mechanized looms, starting in 1846. Paper tape offered one character for each row, and had a maximum capacity of a few dozen KB. It was this perforated paper tape system that was first used in some of the earliest telegraph machines

Starting with the UNIVAC I machine in 1952, magnetic tape gradually became the dominant form of recording and archiving information. Tape drives using a motor were developed to wind tape between 10.5-inch reels.

To protect tape from being damaged by moisture, a plastic enclosure – also known as a cassette or cartridge – was developed in the 1960s. These became popular not only in data storage environments, but also the recording industry. Early home computers like the Commodore 64 and the TRS-80 used cassette tape drives.

In 1956, IBM released the IBM 305 RAMAC, which used magnetic disk storage. It was the first commercial hard disk drive. It also signaled the beginning of tape’s decline as a reliable medium. In 1971, IBM released the first floppy disk, which was 8 inches in diameter and could store data more reliably compared to tape.  Later, compact discs, digital video discs, optical disks and storage devices that don’t have any moving mechanical components became the dominant technology for many consumers and business to store and archive data.

It seems ironic that even with the quantum leap forward in storage technologies, many data centers still rely on tape for their archiving and disaster recovery, despite the fact that an estimated 10 to 50 percent of all tape restores fail.

Despite other efforts to modernize data center infrastructure, such as though cloud computing or virtualization, data protection is stuck in the past with tape.

It would be similar to consumers today listening to their music on cassette tapes, having to fast forward and rewind through songs, when more user-friendly digital audio devices and optical discs are available.

Like a proverbial dinosaur in the data center, tape-based systems are plagued by unreliable backups (an unavoidable consequence of the fact that they are mechanical devices prone to wear and tear), restores take such a long time that they impact your productivity, and tapes can get lost or labels fall off.

Even for organizations that use tape to meet legal requirements for archiving, perhaps this anniversary should serve as a reminder that tape – like the rotary phone or snowy TV reception – is a technology whose time has come and gone. Many of those IT teams suffering from restore failures would probably agree.