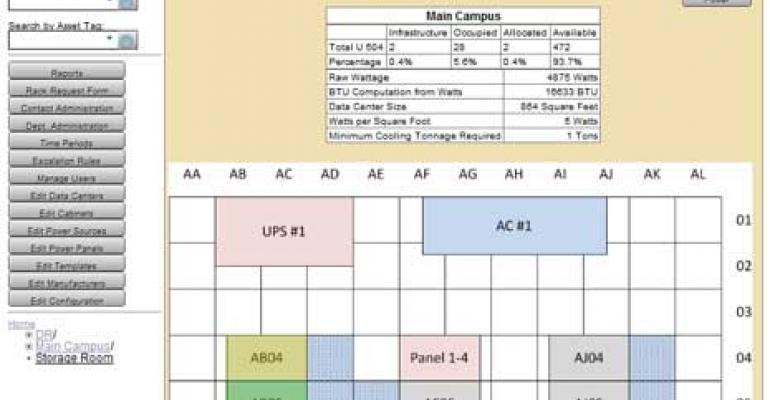 The openDCIM project offers an open source alternative for companies seeking to improve their asset tracking and capacity planning. The project is the brainchild of Scott Milliken of Oak Ridge National Laboratory, who will share details about openDCIM at Data Center World Fall 2012. 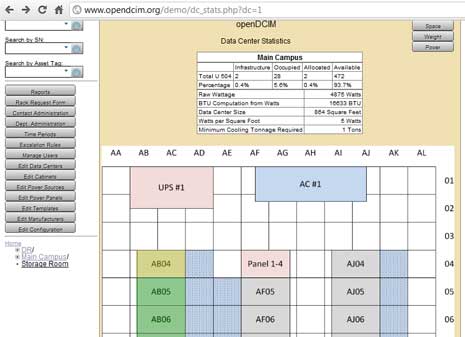 A screen shot of openDCIM software, showing a data center floorplan with a color-coded overlay for space, power and weight capacity. (Image: openDCIM)

Data center infrastructure management (DCIM) is a growing challenge for data center managers, and a hot market for software vendors. But what if you're operating with a limited budget? The openDCIM project offers an open source alternative for companies seeking to improve their asset tracking and capacity planning.

The project, which was launched May 1, is based on software created by Scott Milliken, Computer Facility Manager at Oak Ridge National Laboratory in Tennessee, which has been released under the GPL v3 license. Milliken, who programmed inventory and logistics applications before becoming a data center manage at Vanderbilt University, says openDCIM is already being used in production by academic and research institutions. The software is available at the openDCIM web site as well as GitHub.

Miliken will provide details about openDCIM in a session at the Data Center World Fall 2012 conference slated for Sept. 30 – Oct. 3 at the Gaylord Opryland Hotel in Nashville, Tenn. We recently conducted a Q&A with Milliken about openDCIM, managing by spreadsheet, and the project's aspirations.

Data Center Knowledge: Tell us about the origins of the Open DCIM project? How did this get started?

Scott Milliken: I walked into my first week on the job as the first Data Center Manager that Vanderbilt University had ever hired, and asked for a list of who owned which servers in the data center. In other words, I wanted an inventory of what I was now responsible for keeping safe. For those who aren’t familiar with university data centers – and this seems to be true for MANY of them out there – they typically have three things in common: (1) they are not to be confused with the Medical Center’s data center, because that’s a business, and this is higher education; (2) they have been populated by various groups, with no overall authority governing them, and with separate funding models; and finally (3) if the users had their way, what goes in will never come back out.

Because of this dynamic, the concept of having an all encompassing list of what was in the data center, what it was called, and who owned it was pretty laughable. At that point I realized that I needed two things to get this under control – first, the ability to funnel all data center movement through my group; and second, the right toolset. The first was accomplished through upper management’s adoption of ITIL and the second didn’t really exist, so I sat down and decided to build my own. We used spreadsheets until I had enough critical mass in the tool to migrate the data there and then see what else we could do, and eventually had what we felt was a pretty useful tool.

When I left Vanderbilt to come work at ORNL, I sat down with our Associate Vice Chancellor, who was a big supporter of Open Source, and asked if we could turn it into an OSS project. He agreed, and officially openDCIM was born.

DCK: The openDCIM web site say the project’s number one goal “is to eliminate the excuse for anybody to ever track their data center inventory using a spreadsheet or word processing document again.” Is the ongoing reliance on spreadsheets a function of tight budgets, or are there other factors?

Milliken: I think the dependence on spreadsheets is only partially to do with tight budgets. If you can show the value in a toolset, you can get funding for it. The problem that I’ve seen with most DCIM packages is that they are trying to do too many things, and don’t really understand what the people who use DCIM need it for. Frankly, the vendors need to stop talking to 3-letter executives, because a CIO has no clue what it takes to use the tools that they are helping to influence.

Let me give you a prime example of this – let’s say that the CIO has authority over Facilities, Data Center Management, and IT Management. Three very broad group definitions that have their own data sets to keep regarding what’s in the data center as it relates to their job function, and combining all of that data requires careful coordination.

Often times, Data Center Management doesn’t have the rights to even query the granular levels within the devices residing in the data center. Many data centers house equipment that they don’t own. Facilities Management would have a similar issue with the details at the Data Center Manager level – especially in hosting environments, or in my current world, where information is compartmentalized on a need to know basis. Most of what I’ve seen in the DCIM market tries to bridge all three of these – or worse, is really a package designed for Building Management or IT Asset Management that has tried to slide towards the center. openDCIM started in the middle, and hopes to integrate with the edges rather than creep towards them.

If there was one key lesson that I learned from my years as an inventory application designer, it’s that the best way to get people to follow your processes is to keep the data relevant. When you’ve got an entry screen for a server, switch, or widget going into your data center, don’t ask for things that the tech can’t enter right then and there. If you do, you’re only asking for your data to get wildly out of sync, and for your staff to get disenfranchised with the entire process. Make the data entry process – the most crucial part of keeping your inventory accurate – as simple as possible, and with as little clicking as possible. The person entering the information shouldn’t be sitting at a desk with an ergonomic keyboard and mouse pad in front of them – they’re going to be holding a laptop with one hand and typing with the other while trying to fit their head between two servers and holding a flashlight between their teeth. That’s the reality that a CIO will never understand.

Data Center Managers understand that they have to keep track of a data set that they are probably the only people to be interested in, but it’s vital to them doing their job. Spreadsheets have simply been the easiest way to keep track of it, because they require zero programming knowledge, and very little planning to implement. I’ve used them to keep up with my inventory. I doubt any Data Center Manager can say with a straight face that they’ve never used them. They’re very convenient for data entry, but a major mess when it comes to pulling useful reports.

So back to our number one goal – to eliminate the excuse for using spreadsheets or word processing documents to track your data center inventory – the barrier to cost is removed. Sure, you still need a web server to run it on, but who can’t spare a very modest virtual machine? The idea is to get data center managers to look beyond just a spreadsheet of which servers go where, and to see how all of the individual pieces in the data center affect the whole. Spreadsheets are kind of limited to one layer of the data center, when management of data centers is very much a multi-variable calculus.

DCK: There’s been some concern about “definition creep” for DCIM. How do you view the parameters for DCIM, and how has that guided development of openDCIM?

Milliken: openDCIM aims to be a solution that solves the problem of managing inventory in the data center. To many people, that doesn’t fit their definition of what DCIM is, or should be. I’ve also stated that we’re not looking to creep over to the IT Management or Facilities Management sides, but would rather be open so that others can integrate with us.

The biggest concern I have heard is that we’re not “Enterprise Grade,” and I agree with that. It’s one of the reasons why we don’t want to creep into the Building Management System area. My argument, though, is that what we’re trying to accomplish isn’t something that needs to be enterprise grade! openDCIM is something that you can use if it suits your needs, and if your needs grow beyond what it can accomplish, the database structure is wide open. If you want to know how elements within the database relate to each other, consult the wiki, or ask a developer. This is the nature of Open Source Software for many – we’ve put it out there for you to use, or to not use. It’s your choice, but at least now you have a choice.

DCK: Building a community of developers is an important element in the success and growth of open source projects. Where does this effort stand? Has the growing interest in commercial DCIM offerings made it difficult to find developers to participate in this type of project?

At first I was concerned about the longevity of the project, I’ll admit. I had wrangled a friend of mine from Vanderbilt into help out on the project, and together the two of us pulled out all of the proprietary references and made it generic for public consumption. In May 2012, we released the 1.0 version, and have put out an incremental release about every 30-45 days since then. We’re readying our 2.0 release, which will support internationalization. Honestly, I never thought that we’d ever have enough support to branch out beyond the English (or in my case, Bad English) speaking world, but we’ve got people using openDCIM all over the world, and volunteering to help with translations. I’ve been honest with them – I’ve never been involved in a multi-lingual project. I’m learning it all from scratch right now, but we’ve got some developers that in very short periods of time have shown us new programming techniques that we weren’t aware of, and have been both patient and extremely grateful with our efforts. People who think that they can’t contribute have been able to find bugs for us that we didn’t catch, ourselves. For many developers, writing the code isn’t the hard part – it’s testing all of the possible use cases, and writing documentation. We’ve got people stepping up to help in those areas that don’t know the first bit about writing code, and let me tell you, I’m grateful!

I don’t have permission to name specific companies that are involved, but I can tell you that there is a good portion of higher education and research facilities using openDCIM in production today, and even some commercial facilities. They’re also located all the way around the globe. The only continent I know of that isn’t represented is Antarctica. I’m sure someone’s eyeing a spot down there for a data center, but who knows what they’ll use to keep up with inventory.

DCK: Your session at Data Center World is titled “DCIM on a Dime.” Tell us a little about what attendees can expect to gain from this session.

I’ve got slides for about 20-25 minutes that will go over the history and basic features of openDCIM, and then I’m going to fire up a virtual machine on my laptop and give a demonstration of it. I’ll then open the floor to questions and just see where it goes from there. If you attend Data Center World, you’ll already get a thumb drive with the presentation on it, and the last slide gives you the URL for an online demo that you can play with for yourself.