Data Center Water Use Moves to the Forefront

The largest data center operators have made significant strides in slashing their water use, and the industry has developed metrics and best practices to encourage broader participation in the effort. The focus on data center water usage made headlines last week when Facebook released its initial data on water usage effectiveness (WUE) at its data center in Prineville, Oregon. 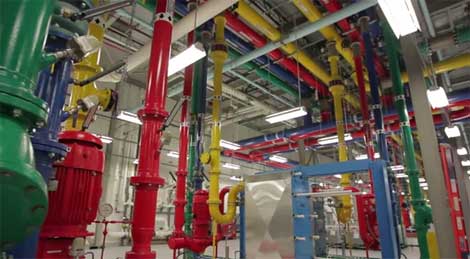 Three years after Hamilton's critique, the largest data center operators have made significant strides in slashing their water use, and the industry has developed metrics and best practices to encourage broader participation in the effort.

The focus on data center water usage made headlines last week when Facebook released its initial data on water usage effectiveness (WUE) at its data center in Prineville, Oregon. The WUE metric was developed by The Green Grid as a way to extend its focus on efficiency beyond power, which has consumed much of the industry's focus on best practices.

In publishing data from Prineville, a facility optimized to carefully manage water usage, Facebook believes it has established a good benchmark for other users running large facilities. Ther PRN1 data center's WUE for the second quarter of 2012 was 0.22 liters per kilowatt hour of equipment energy used.

"We think that 0.22 L/kWh is a great result, but it should be noted that the WUE concept is fairly new and, to our knowledge, no one else has publicly reported WUE yet," writes Facebook's Daniel Lee. "We hope that other companies will soon start measuring and reporting WUE so we can begin setting benchmarks for the metric and working together to find new ways to improve."

The Green Grid quickly threw down the gauntlet to the industry. "The bar has been set!" the group tweeted. "TGG member Facebook released its WUE figures today, the first data center to publicly do so. Who's next?"

The enormous volume of water required to cool high-density server farms is making water management a growing priority for data center operators. A 15-megawatt data center can use up to 360,000 gallons of water a day, according to one estimate.

Why do data centers use so much water? The move to cloud computing is concentrating enormous computing power in mega-data centers containing hundreds of thousands of servers. In many designs, all the heat from those servers is managed through cooling towers, where hot waste water from the data center is cooled, with the heat being removed through evaporation. Most of the water that remains is returned to the data center cooling system, while some is drained out of the system to remove any sediment, a process known as blowdown.

As the scale of these huge facilities has increased,  data center operators have begun working with local municipalities, water utilities and sewage authorities to reduce their impact on local potable water supplies and sewer capacity. This was an issue for Facebook in Oregon, but it's hardly alone in taking steps to address the issue.

In a move that will save millions of gallons of potable water for the local community, Microsoft teamed with the city of Quincy, Washington to retool the city’s water treatment infrastructure. As part of the partnership, a multi-million dollar water treatment plant built by Microsoft to support its data center will be leased to the city of Quincy for just $10 a year. The plant will be retrofitted and expanded to support the water reuse initiative, which will allow other nearby businesses and data centers to benefit. Microsoft’s existing water treatment plant infrastructure was built to reuse the water from the local farming community’s food processing plant. The plant would filter that water and use it to cool the Microsoft data center. Afterwards, they would filter the water again before returning it to the aquifer.

A Google data center near Atlanta is recycling waste water to cool the thousands of servers housed in the facility, and then purifying the excess water so it can be released into the Chattahoochee River. The project to use “grey water” in Atlanta is part of Google’s broader program to reduce the impact of its data centers on the environment and local community. The facility, which was built in 2008 (and described in a 2010 DCK article) is Google’s first water treatment plant in the United States. Google financed the building of a “sidestream” treatment plant for the Douglas County Water and Sewer Authority (WSA), which intercepts 30 percent of the water from the authority’s treatment plant.

With WUE, The Green Grid has created a metric that can allow data center users to track their internal progress on managing water usage. But as with the PUE standard for energy efficiency, there's bound to be comparisons between different design approaches.

Prineville 1′s design features a “penthouse” cooling system, which uses the upper floor of the building as a large cooling plenum with multiple chambers for cooling, filtering and directing the fresh air used to cool the data center. This approach uses outside air economization, with a direct evaporative cooling and humidification (ECH) misting system, with small nozzles attached to water pipes that sprayed a fine mist across the air pathway, cooling the air and adding humidity.

Facebook recently told DCK that it is updating its data center cooling system. In phase 2 of the Prineville project, Facebook has replaced the misters with an evaporative cooling system featuring adiabatic media made of fiberglass. Warm air enters through the media, which is dampened by a small flow of water that enters the top of the media. The air is cooled as it passes through the wet media.

“Our analysis of options focused on the amount of water usage,” said Jay Park, Director of Datacenter Engineering for Facebook. “The expectation was that the media would require a lot more water, but that turned out not to be true."

Here's a look at the cooling design for PRN1. You can click the image for a larger version. 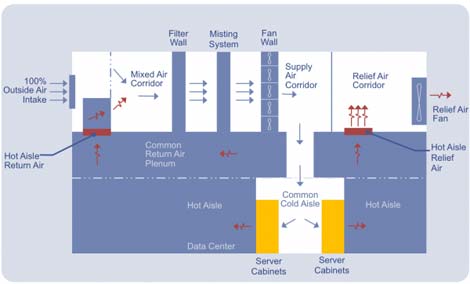