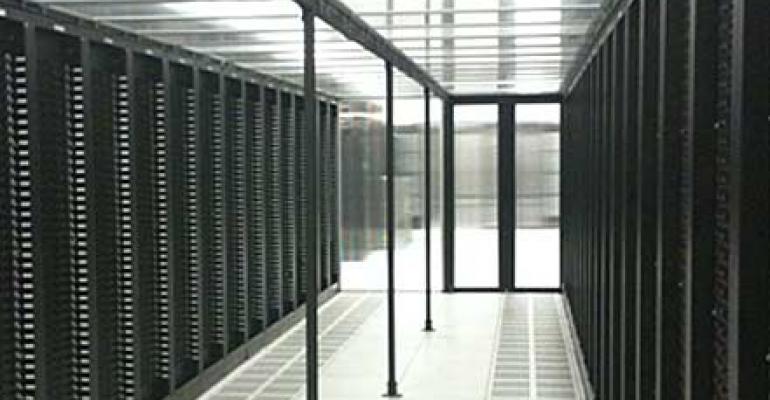 A look at a cold-aisle containment systems installed by Facebook in one of its Silicon Valley data centers.
Companies>Meta (Facebook)

Facebook has been building some of the world's most efficient data centers. But its leased space accounts for 85 percent of its data center energy use, and will continue to have a big impact on its carbon footprint for several more years. 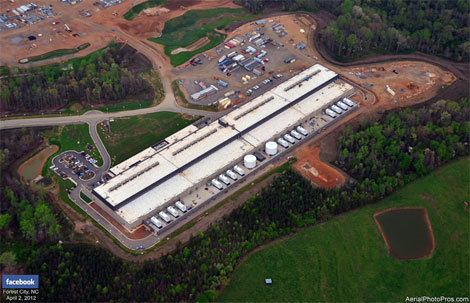 Over the past two years, Facebook has been building some of the world's most efficient data centers. But when it comes to its total infrastructure, Facebook's leased space accounts for 85 percent of its data center energy use, and will continue to have a big impact on its carbon footprint for several more years.

This reality places a premium on the management of the company's leased space - which includes wholesale data center suites and colocation cages - as it gradually shifts most of its infrastructure to company-owned facilities.

In 2011, Facebook's leased space in Silicon Valley and northern Virginia accounted for 432 million kilowatt hours of the company's total of 509 million kilowatt hours - or about 85 percent of the company's data center power footprint. That's partly due to the huge amount of servers Facebook deployed in third-party facilities before it made the decision to begin building its own data centers, and partly because the company-owned server farms in Oregon and North Carolina are far more efficient than the designs the company deployed in its outsourced space.

Looking Beyond Energy Mix and Sourcing

Last week Facebook (FB) released a detailed summary of its 2011 carbon footprint, energy mix and energy use for its data centers and global offices. Most of the coverage of the announcement has focused on the "green" power component and the balance of coal-sourced power (27 percent) versus renewable energy sources (23 percent) in the company's total energy use.

But the report also demonstrates the ongoing importance of leased data center space in Facebook's push towards energy efficiency and sustainability. Here's some key trends and data points about Facebook's third-party space:

Even as it invests hundreds of millions of dollars in building its own data centers around the world, Facebook is also continuing to invest in third-party data center space in both Silicon Valley and northern Virginia. Industry sources say Facebook is in the process of expanding its footprint with Fortune Data Centers in Silicon Valley. The social network is also leasing additional space in northern Virginia, where its investment "could potentially reach hundreds of millions of dollars in the coming years,” according to Will Castleberry, State Public Policy Director for Facebook. The latest Virginia lease is with DuPont Fabros Technology.

In late 2010 Facebook began a series of retrofits of its existing colocation and leased data center suites, implementing  a series of best practices including air-side economization, cold aisle containment and raising the server inlet temperature. These techniques produced nearly $300,000 in annual savings in one facility and reduced its annual energy usage by 2.8 million kilowatt hours in another site.

Facebook is also working to bring its Open Compute Project (OCP) designs into its leased wholesale space. The OCP designs were developed for Facebook's company-built data centers, which feature a custom power distribution system that has no centralized UPS system. Facebook has been working with landlord DuPont Fabros Technology (DFT) to implement its Open Compute designs in a leased data center in Ashburn, Virginia. Digital Realty Trust, another large data center operator, has adapted Open Compute concepts in reference designs for its data center pods, making it easier for customers - including Facebook - to implement them in a new data center.

Facebook currently spends more than $70 million a year leasing “plug-n-play” wholesale data center space from at least four providers, including Digital Realty, DuPont Fabros, CoreSite Realty and Fortune. As a result, the impact of Facebook’s exodus from third-party space will be spread across providers, as well as time. Facebook says that it will gradually shift its server capacity from leased data centers to company-owned facilities, migrating out of many third-party facilities as its leases expire.

An analysis of financial data from wholesale providers suggests that Facebook will be vacating a significant chunk of wholesale real estate between 2015 and 2018. The company says it will evaluate each lease on its merits as its needs evolve – meaning it could keep some of its leased space.

Facebook’s total energy use from office space, data centers and other facilities was approximately 532 million kWh. The energy mix for that use came from 27 percent sourced from coal, 23 percent clean and renewable sources, 17 percent from natural gas, 13 percent from nuclear and 20 percent un-categorized. Of its 285,000 metric tons of CO2e (Carbon Dioxide Equivalent) 207,000 came from its data centers.

Facebook said once its Lulea, Sweden site comes online in 2014 it expects to see a steady increase in the use of clean and renewable sources (at least the servers will be warm getting there)

Greenpeace praised Facebook for its transparency, the 25 percent goal and its policy for prioritizing clean energy for new data centers.  Many of the goals released in Wednesday's news were re-hashed from the December 2011 truce with Greenpeace. As an example of their advocacy Facebook explained that it recently partnered with the Natural Resources Defense Council and Opower to help people track their home energy use, compare it with their friends’ and share tips on how to save energy.