The need to store rainwater is driving an unusual roof design for the new CyrusOne data center project in Chandler, Arizona. The huge roof for the facility will have a V shape, with high sides tapering down to a channel down the middle. 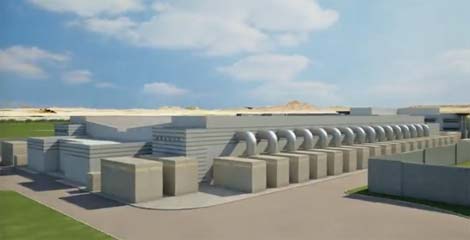 An illustration of plans for the new CyrusOne data center near Phoenix, which will have a V-shaped roof (seen at center). (Image: CyrusOne)

The need to store rainwater is driving an unusual roof design for the new CyrusOne data center project in Chandler, Arizona. The huge roof for the facility will have a V shape, with high sides tapering down to a channel down the middle. CyrusOne CTO Kevin Timmons disclosed the new approach in a recent blog post.

CyrusOne, which is the colocation subsidiary of Cincinnati Bell, recently began construction on a "greenfield" data center on a 57-acre parcel of land it purchased in Chandler, Ariz. last fall. The site will house a 1-million-square-foot “Massively Modular” data center. The groundbreaking comes on the heels of an industry peer review session the CyrusOne executive team hosted in late April to optimize the facility design plan.

"We’ve sweated the design details on every aspect of this project, including the roof," said Timmons. "It’s an innovative marvel in itself. It is peaked at the perimeter with a valley through the center spine, exactly the opposite of every other roof you’ve seen. This roof shape allows for the natural convection of hot return air from across the mission critical space back to the perimeter of the building where cooling units are installed. At the same time, the center valley collects rainwater and routes it away from the building to catch basins where it is reused for site cooling and landscaping needs."

Water management is becoming an important consideration in data center design and operations. Both Microsoft and Google have invested in advanced systems to allow their facilities to use "grey water" recycled from local factories or water treatment plants.

CyrusOne’s parent company, Cincinnati Bell, has announced plans to spin off the data center business through an initial public offering, most likely as a real estate investment trust. No date has been announced for the IPO. In the meantime, the company ahs completed expansions in Austin and San Antonio, gotten rolling on a 700,000 square foot project in Dallas, and broken ground in Phoenix.

Here's a brief video overview of the exterior design of the CyrusOne Phoenix facility. This runs about 1 minute.