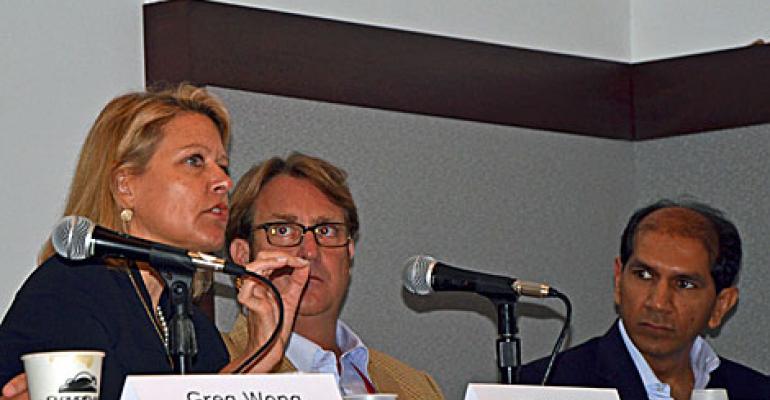 Hillary Stiff, Cheval Capital, said the recent trend in acquisitions has been moving towards strategic deals as compared to deals made for growth that happened during the last decade. To the right is Joe Bardenheier, Endurance, and Sumeet Sabharwal, Navisite.
Design

There's a new metric in web hosting acquisitions: whether a seller has a supply of unused IPv4 addresses. Investment bankers working on hosting deals say the scarcity of IPv4 addresses is becoming a factor in some transactions. 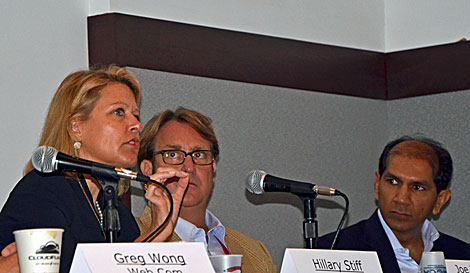 BOSTON - There's a new metric in web hosting acquisitions: whether a seller has a supply of unused IPv4 addresses. Investment bankers working on hosting deals say the scarcity of IPv4 addresses is becoming a  factor in some transactions.

Stiff spoke as part of a panel at HostingCon 2012 on mergers and acquisitions in the web hosting sector. HostingCon, the largest conference for the hosting industry, got underway today and continues through Wednesday at the Hynes Convention Center in Boston.

Why the fuss over IPv4 addresses? They're not making any more of them. The Internet Assigned Numbers Authority (IANA) distributed the final unreserved IPv4 address blocks in early 2011. meanwhile, the transition to IPv6 is a gradual process, with full implementation taking years.

At some point, companies and providers will begin running out of IPv4 addresses, making the remaining unused addresses more valuable for those who have them. Some have warned of a "black market" developing for IP addresses, as existing guidelines for transfers of address blocks may not recognize the value of unused IPv4 addresses as they become scarce.

One avenue is to bundle these IPv4 addresses into a deal in which a hosting company or service provider is acquired. In the context of a larger deal, available IP addresses become one of many variables in assessing a company's value. This provides a way for sellers to recognize the fact that these addresses make their company more valuable.

"It seems as though this will continue until we have everyone on IPv6," Stiff said.

IPv6 is the newest version of the Internet Protocol, a set of instructions that guides how networks communicate. The growth of the Internet has depleted the available supply of IPv4 addresses. The transition from IPv4 to IPv6 will dramatically expand the number of addresses available for web sites, as well as millions of mobile devices with Internet access.

June 6 was declared IPv6 "launch day" by  large network operators and regulators. But while major hosting and network providers have made IPv6 operational, it represents just a small fraction of total Internet traffic.

So how do IPv4 addresses change hands? John Curran, president and CEO of the American Registry for Internet Numbers (ARIN) explained the standard process in an interview last year.

“ARIN has a ‘Transfers to Specified Recipients’ policy in place that allows an organization to transfer its Internet number resources to another organization in the ARIN region, provided the recipient organization receives them under ARIN contract and can justify its need for the resources,” said Curran. “ARIN operates a Specified Transfer Listing Service to facilitate these transactions, though organizations are not required to use the listing service to use the transfer policy. We believe that these are sufficient tools for those organizations that might need some additional time in their migration to IPv6.”