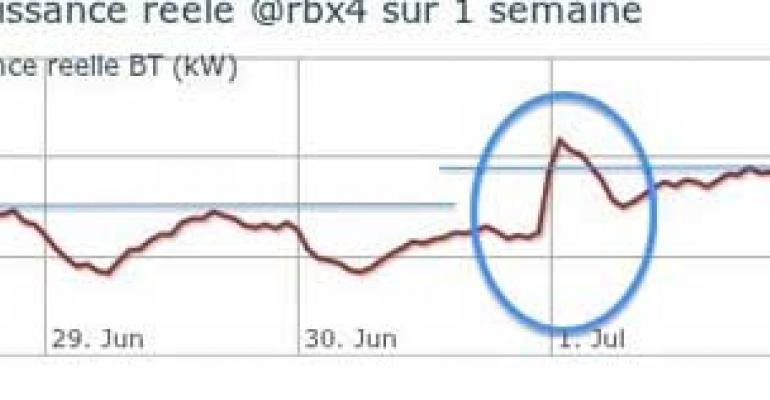 Several large web hosting providers, including Hetzner and OVH, say the "leap second" last weekend caused power usage to spike on their Linux servers, which continued drawing power at above-average levels until the server was restarted.

This power usage graphic from hosting firm OVH shows a spike in IT power that begun during the "leap second" this weekend. (Photo: OVH via Yfrog)

"The reason for this huge surge is the additional switched leap second, which can lead to permanent CPU load on Linux servers," Hetzner said in an email, in which it asked customers to perform either a soft reboot (or if that doesn't address the issue, a hard reboot in which the server is turned off) in order to reduce server power usage. Hetzner runs more than 35,000 servers across its infrastructure.

A leap second is a one-second adjustment that is occasionally applied to Universal Time (UTC) to account for variations in the earth’s rotation speed. A number of web sites and IT systems reported service outages Saturday as servers experienced difficulty handling the time adjustment.

The additional second caused particular problems for Linux systems that use the Network Time Protocol (NTP) to synchronize their systems with atomic clocks. The leap second caused these systems to believe that time had "expired," triggering a loop condition in which the system endlessly sought to check the date, spiking CPU usage and power draw. Hosting companies are major users of Linux systems, which are released as  open source and normally do not require a paid license.

Power usage is a major expense for web hosts and companies that maintain thousands of servers, which has prompted an increased focus on energy efficiency in recent years.

For a deeper technical explanation of the Linux leap second bug, see this post by John Stultz at LKML.org.