At Structure, Sorting Out Clouds & Competition

Highlights from Structure 2012: Why Netflix is building its own CDN, Zynga's de-clouding pays off, Amazon Web Services as the 8,000 pound gorilla, and momentum for OpenStack. 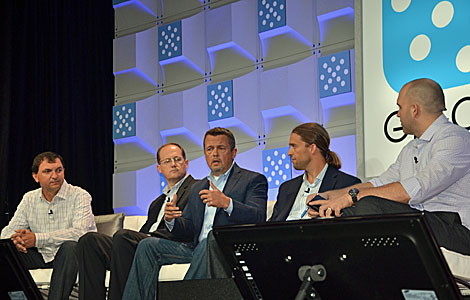 The GigaOm Structure 2012 conference kicked off Wednesday with a power-packed lineup of leading players in cloud computing and IT infrastructure participating in panels and presentations. Here are some highlights from the conference:

Netflix: We Outgrew CDNs: Was Netflix' decision to build its own content delivery network a sign that it's reconsidering its reliance upon Amazon's cloud computing platform?  Adrian Cockroft, the Director of Architecture at Netflix, has heard the speculation and says it's based on a misunderstanding of its providers. "In our use of Amazon Web Services, we're not that large a customer," said Cockroft. "But when you look at the CDN sector, we represent a high percentage of business for the three largest CDNs. We outgrew the suppliers. In AWS, we're not nearly there."

De-Clouding Pays Off for Zynga: While Netflix is happy on Amazon, Zynga affirmed that its decision to shift most of its workloads to its in-house zCloud has paid off. "We're getting a 3X benefit running on our own cloud," said Debra Chrapaty, the CIO of Zynga. "We kind of figured it out in Amazon, and it worked really well. At a certain time, it mkes sense to own your own base."

Enthusiasm for Amazon Cloud: One of the most popular sessions Wednesday was an appearance by Amazon CTO Werner Vogels, who offered thoughts on the next five years for Amazon Web Services. "I think we're going to continue to execute across all dimensions,"said Vogels. "You'll see a continuous evolution. We'll continue to drive costs down and lower our pricing, and continue to innovate." Vogels made no mention of the recent outage for Amazon's cloud services.

GoGrid: Beware of Cloud Washing: Few were more complimentary of Amazon than John Keagy, the CEO of GoGrid, who used his presentation time to criticize "fear-mongering and cloud-washing" - and to praise AWS. "In my book, Amazon equals cloud," Keagy said. "Amazon isn't just an 800 pound gorilla, it's an 8,000 pound gorilla."

Cloud APIs vs Open Clouds: Rackspace Hosting President Lew Moorman acknowledged Amazon's importance as a cloud pioneer, but said that although many cloud technologists see APIs as the key to interoperability between platforms, APIs are not enough. "Cloning APIs is not possible," said Moorman. "It's not going to happen. It's hard to hear. What is the power of a model that is always behind and not quite the same? You've got to have the whole cloud. APIs are not the solution. The answer is a true, open, end-to-end cloud, with access to the code base as well as APIs. This is why OpenStack exists." Moorman said Rackspace will begin using OpenStack to power its cloud service on August 1.

OpenStack Ascendant? One cloud watcher who was impressed with OpenStack is Joe Coyle, the VP and CTO of global service provider CapGemini. "I think Open Stack is going to give everyone a run for their money, even Amazon," said Coyle. "It might give Amazon pause and make them consider whether they continue with the proprietary path or open things up a bit." Coyle also had praise for Virtustream as an important emerging player in the market for enterprise cloud services.

Efficient Facilities, But Not Custom Servers: At an event that featured discussion of cutting-edge technologies, providers of colocation and wholesale data center services sought to refocus the discussion on a facility level. "When someone says 'I want to be like Facebook or Google,' what are they really saying?" said Jason Mendenhall, EVP of Cloud at Switch. "They're saying they want to be more efficient." Since customers populate cages and suites with their own equipment, "the way we can differentiate ourselves is geography and efficiency," said Kevin Timmons, the CTO of CyrusOne.