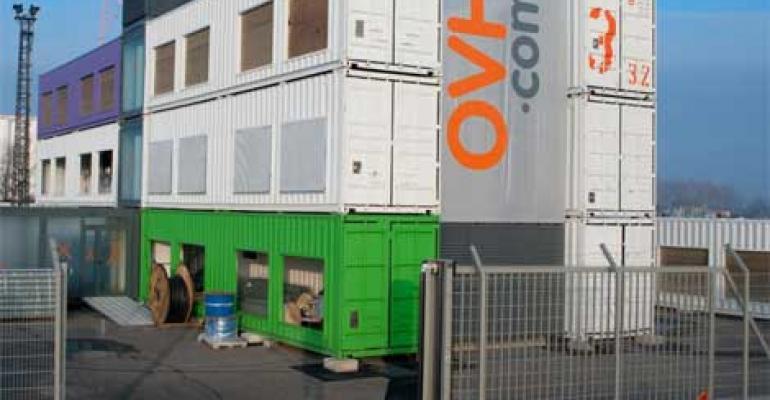 French hosting firm OVH has opened a new data center in Strasbourg, France that recreates many elements of its innovative "cube" design using stacks of shipping containers housing servers. The facility features 12 containers, which are stacked three-high in two rows. 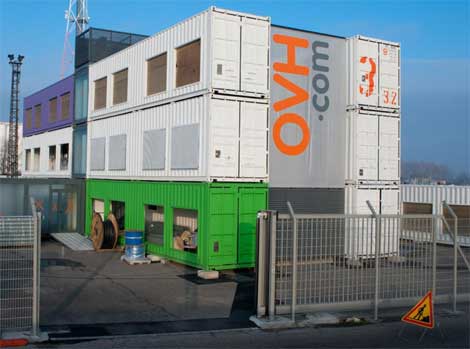 The new OVH data center in Strasbourg, France uses a stack of shipping containers to re-create the "Cube" effect the company created in its data center in Roubaix, France. (Photo: OVH)

The French firm OVH is one of the world's largest hosting companies, with more than 120,000 servers. It has also earned a reputation for its innovative data center designs. DCK readers may be familiar with OVH for the innovative Cube-shaped data center it opened last year in Roubaix, France, which houses servers in an exterior corridor built around an open center, allowing for easy airflow through the facility.

Earlier this year OVH opened a new data center in Strasbourg, France that recreates many elements of the cube design using stacks of shipping containers housing servers. The facility features 12 containers, which are stacked three-high in two rows. Outside air enters the facility through louvers in the exterior wall. The air travels through the racks of servers, and then exits the IT corridor via large fans behind the racks, which vent the air outside into the open center.

OVH says its inspiration was the use of containers for student housing in Amsterdam. "Our idea was to obtain a modular building and have it be especially quick to implement," writes Lionel Deny, data centre operations manager, in an overview of the project. "The land we chose was perfect: it was a parking lot! We started with the technological advances developed in Roubaix 4 and, ultimately, it's a simpler solution than Roubaix 4 and ready to use: we take boxes that we put together, and voilà!"

The company says it spent two years perfecting the design concept, and built the facility in six months. OVH said it plans to use the design in future expansions, and believes that it can cut the deployment time further, to between four and five months.

The Strasbourg facility was OVH's seventh data center, and designed to improve latency for some of its European customers. "Strategically, he wanted to get closer to the countries of Central and Eastern Europe, particularly Germany, mainly to reduce latency," said Deny. "And we wanted to stay in France because it is a field we know. As our fiber goes through Strasbourg, we chose to move there."

OVH recently has begun operating servers in its first North American data center in Beauharnois, Quebec. The property is a fomer Rio Tinto Alcan alumnium plant with an airflow design reminiscent of the Yahoo Computing Coop design, designed to allow waste heat to rise and exit through a central ceiling vent. The building is located alongside a dam that will provide 120 megawatts of hydropower to support the facility. OVH estimates that at full buildout, the facility could house as many as 300,000 servers.

This video provides an overview of OVH's infrastructure, including an animated overview of the plans for the Quebec facility.