Alcatel-Lucent (ALU) has unveiled new core routers designed to allow network operators to embrace the rapid adoption of ‘cloud’ applications, the explosion in video traffic, widespread use of smartphones and tablets and prepare the core of their networks for the next decade of growth. 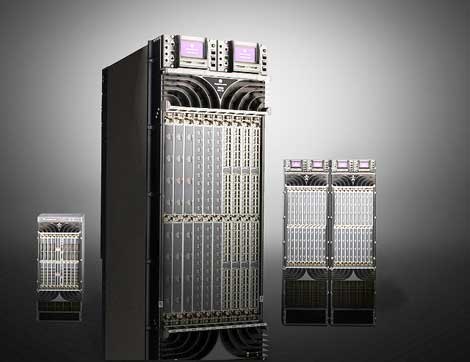 Alcatel-Lucent (ALU) has unveiled new 7950 XRS (Extensible Routing System) core routers, allowing network operators to embrace the rapid adoption of ‘cloud’ applications, the explosion in video traffic and the widespread use of smartphones and tablets and prepare the core of their networks for the next decade of growth.

Alcatel-Lucent has product lines for service routing and the network edge, and now hopes to compete with Cisco and Juniper in the core. The 7950 XRS is based on a compact, highly efficient system design that is built with the future in mind.

The flagship of the family, the 7950 XRS-40, supports 32 terabits per second (Tbps) capacity and 160 100-Gigabit Ethernet ports in a single system. At the foundation of IP transport networks are 100 Gigabit per second links, and with even faster speeds on the horizon the IP backbones and 'metro' cores face a host of new requirements. The 7950 XRS routers represent many years of development and use the latest techniques in silicon and system design, slashing power consumption by more than 66 percent compared to typical core routers.

"The core router platform of the future needs to be able to efficiently deliver enormous capacity, and do so without sacrificing the intelligence and capabilities needed to support an expanding variety of content and applications. With the 7950 XRS family, service providers need not compromise on any of these dimensions,” said Basil Alwan, President of Alcatel-Lucent's IP Division.

Using the Alcatel-Lucent designed FP3 network processor unit (NPU), the 7950 XRS eliminates the tradeoff between capacity and capability. The 7950 XRS has the versatility to support the distinct requirements of both IP backbone networks, which move vast amounts of Internet content around the world, and regional ‘metro’ core networks, where content is increasingly distributed for fast, efficient delivery to consumers and businesses.

“Service providers face a serious problem as they tackle 100G, the next great inflection point in their routing, switching and optical networks. If they keep adding more of the same equipment to their networks, they will end up multiplying space and power requirements” said Michael Howard, Principal Analyst & Co-Founder, Infonetics Research. “Alcatel-Lucent’s new 7950 XRS core router platform appears to address the scaling of core networks without growing both soft and hard operating costs. We expect that service providers will also see direct benefits of the versatility of the 7950 XRS in core/metro/datacenter interconnect networks and include it in their decision process mix as they evaluate how to scale their 100G infrastructure.”