How Open Compute is a Win for Rackspace

In the battle for the hyper-scale data center, long-dominant server OEMs like Dell and HP are doing battle with a growing challenge from firms offering custom server designs. If you're looking for the front lines in this battle, look no farther than companies like Rackspace Hosting. 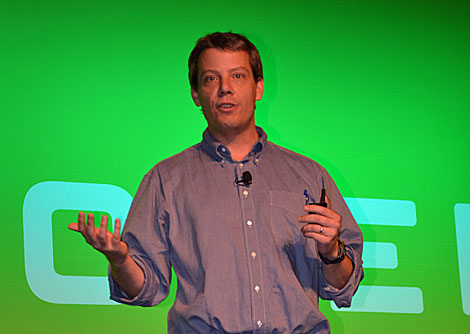 SAN ANTONIO - In the battle for the hyper-scale data center, long-dominant server OEMs like Dell and HP are doing battle with a growing challenge from firms offering custom server designs. If you're looking for the front lines in this battle, look no farther than companies like Rackspace Hosting.

Rackspace is one of the fastest-growing cloud computing providers. The San Antonio company spent $202 million on servers and storage for customers over the past year, adding more than 12,000 servers in its data centers.

Rackspace is also keen on increasing its use of technology based on the Open Compute Project (OCP), which is developing efficient open source designs for servers, storage and data centers. The company believes that the OCP designs can help it reduce costs on hardware design and operations.

But who will build that hardware for Rackspace? That's a multi-million dollar question that demonstrates the potential value of  the Open Compute initiative for service providers and hyper-scale users. Rackspace currently has its servers customized by HP and Dell, but is also having conversations with original design manufacturers (ODMs) like Quanta and Wistron about their capabilities.

This growing vendor ecosystem creates options for Rackspace, according to Mark Roenigk, Chief Operating Officer of Rackspace, who says it has prompted incumbent OEMs to step up their game when it comes to Open Compute hardware.

"I think the OEMs were not very interested (in Open Compute) initially," said Roenigk. "But in the last six months they have become really focused. I think we have a lot to do with that. We have Dell and HP engineers on-site now."

When Rackspace launched its cloud computing operation, it had no supply chain beyond its relationships with Dell, HP and Synnex, Roenigk said. But that's changed.

"Over the last 18 months, we have talked to and visited ODMs," he said. "We know all of those players. I think the next 12 months are going to be interesting. Wistron and Quanta are setting up design shops and offices in the US. I think you will see traditional OEMs working to differentiate themselves in new areas."

At the Open Compute Summit earlier this month in San Antonio, both Dell and HP showed off server hardware that will work with the new Open Rack design, which features 21-inch wide equipment slots rather than the traditional 19 inches. Roenigk says Open Rack will play a key role in Rackspace's cloud computing infrastructure in its next-generation data center design.

"Thus  far we've taken bits and pieces of the Open Compute designs and incorporated them into our solution," said Roenigk. "Our hope and intention is that the Open Compute Project standardizes our design. We have no ambition to be in the hardware business. Open Compute can fill that gap."

The company's enthusiasm for OCP was reflected in comments by Rackspace President Lew Moorman to open the summit.

"Rackspace is totally committed to the Open Compute Project," said Moorman. "We want efficiency and rapid innovation, and we can't do it alone. The collective knowledge in this room coming together is the best way to do it. As our data center projects advance, we will absolutely include Open Compute and give back to the project."

"What we have now is one-off discussions (between vendors and customers)," said Frankovsky. "They're spreading innovation across many unique designs. Open Compute converges this requirement. It makes sure that we in the scale computing community can organize ourselves so suppliers can better develop to our needs. By sharing these designs with the major cloud builders, these clouds will be that much more efficient."

That efficiency isn't just about energy savings and compute performance. Roenigk believes Rackspace can realize considerable benefits in staffing, redeploying engineers from server and data center design to other areas of the company's operations.

Price Not the Only Decision Point

And what about price savings on servers? While companies developing OCP designs like Quanta, Wistron and Hyve will be tough competitors, Roenigk says the key will be how HP and Dell deliver on their commitment to Open Compute.  And price may not be the deciding factor.

“If HP and Dell can price something near where Quanta can, then I don't have to call eight other guys to make it work," said Roenigk. "Speed is important, because we're growing so rapidly. In some ways, it's more important than price. It's a value proposition. There are times when I would rather get something now than get a better price later."

That's particularly true in Rackspace's cloud hosting operation. In the company's substantial managed hosting business, servers are provisioned in response to specific customer requirements. In the cloud business, the capacity has to be in place and ready for new signups. "We have to build it before they come," said Roenigk.

If server vendors were slow to warm to the significance of the Open Compute movement, Roenigk says, they weren't alone.

"I was skeptical out of the gate," he said. "I truly believe it's real now. I think we're seeing a fundamental shift I've not seen anything like in my 20 years in the business."