Are modular data centers cheaper to deploy than traditional raised-floor data center space? Usually. But it's complicated. That's the verdict from 451 Research which studies the economics of modular designs and detailed its findings this week at the Uptime Symposium. 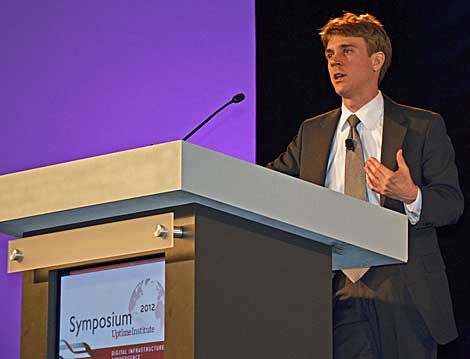 John Stanley, Research Analyst, Eco-Efficient IT at The 451 Group, presented about the research group's evaluation of the economics of pre-fabricated modular data center units.

That's the verdict from 451 Research, which studied the economics of modular designs and detailed its findings this week at the Uptime Symposium 2012 at the Santa Clara Convention Center.

"Based on our research, we think it’s reasonable that you could get 10 percent to 30 percent savings on CapEx (capital expenditures) from using a pre-fabricated, modular approach, compared to a good traditional build," said John Stanley, Research Analyst for Eco-Efficient IT at 451 Research. "The cost savings are worth looking into, and could be significant."

But in an industry where the merits of modular deployments are hotly debated, the analysis by 451 Research was carefully hedged.

"The financial comparison between traditional and modular is complicated," said Andy Lawrence, Research Director for Datacenter Technologies at 451 Research, and Stanley's co-author of the research report. "It depends on all kinds of different factors. I think CapEx is really the key thing, especially with capital so constrained. We’re pretty sure the cost advantage applies in many scenarios."

A Shift in the Modular Conversation

This year's Uptime Symposium reflected an ongoing shift in the industry discussion of modular designs, with a growing focus on economics and other factors directly tied to purchasing decisions. The event featured three keynotes and an entire content track on the economics of modular data centers, along with a modular data center campus in the expo hall featuring offerings from four providers.

"We’re tracking 35 suppliers," said Lawrence. "They think this is a market worth chasing. It’s undeniable that it is a very effective means of deploying data center space for some users. The adoption won’t be linear, and won’t be universal."

Providers of modular products broadly affirm that they are seeing more  traction with users, but acknowledge that the current market is a forward-leaning subset of the larger base of data center users.

"I think it’s transformational," said Neal Rasmussen, Chief Innovation Officer at Schneider Electric. "It doesn’t mean all IT will be in a container in the parking lot. We don’t see that. We’re trying to make data centers more like buying a car, and less like buying house."

"We’re starting to get liftoff," agreed Liz Fetter, CEO of NxGen Modular, whose modules are being used in data centers for several large cloud builders. "I think the market is maturing. But it’s still an early adopter market. There’s still not that much money being spent on modular."

One large company that has investing in modular designs is eBay, which has modules from Dell and HP housed on the roof of its Phoenix data center that can use free cooling in 100-degree plus heat.

Not for Everyone, But Performance Gains Possible

"Containers will not solve everyone’s problems," said Dean Nelson, director of Global Foundation Services at eBay, who spoke about the extreme performance metrics of eBay's modules in a keynote presentation Monday. "But when you standardize and want to scale, they make a lot of sense."

An August 2011 survey of Data Center Knowledge readers found that 35 percent of our readers are currently either using modular products or evaluating them with an eye towards adopting the technology in the next 12 to 24 months (See State of the Modular Data Center for more metrics).

Lawrence said that adoption rate will depend upon whether modular vendors can demonstrate cost advantages, as other claimed benefits proved more variable in 451 Research's analysis.

"Modular data centers need to have an economic advantage, because the other advantages aren’t clear," said Lawrence. "It doesn’t look like people are willing to pay extra for speed of deployment. That's why we think the modular industry has to show a price advantage."

While many proponents of modular design had high-profile presentations at Uptime, the critics had their say as well.

"We’ve heard a lot today about how containers will solve all the world’s ills and make them float away on clouds and unicorns," said Dan Golding, vice president and GM of the Ashburn campus for RagingWire Data Centers. "But are we ready to wave the white flag on innovation? Are we ready to declare that our data centers will be uniformly mediocre in coming years?

"This has gotten out of control," Golding continued. "You don’t want to be different just to be different. Bankers want data centers to all be alike, because then they could boil it down to the numbers. Have we commoditized everything in our industry? I beg you to reject the idea that all data centers are the same."

There is actually some diversity in how providers of modular products are approaching the market. Three of the four participants in the modular campus at the Uptime expo were showcasing modular approaches to power and cooling infrastructure, rather than housing servers. That includes wholesale data center developer Digital Realty, which continues to offer traditional raised-floor space in its data halls, but is deploying its power and cooling infrastructure in pre-packaged modular chunks.

"The IT environment is so much more complicated than the back-end environment," said Jim Smith, the Chief Technology Officer of Digital Realty. "So we focused on the back of the house, which is relatively straightforward."

Smith sees the emergence of pre-fabricated modular infrastructure as a sign of the ongoing growth and maturity of the data center market. "Other industries do this all the time, said Smith. "I think the emotional hurdles for people in our industry have been overcome."