CyrusOne is moving dirt in Phoenix. The data center service provider, which is the colocation subsidiary of Cincinnati Bell, broke ground today on a 57-acre parcel of land it purchased in Chandler, Ariz. last fall. 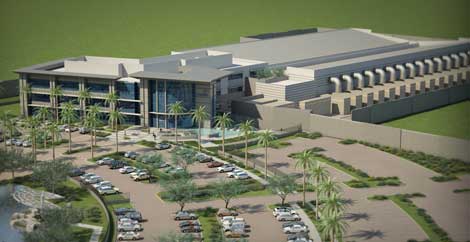 A design of the plans for the CyrusOne data center project in Phoenix, which broke ground this week. (Image: CyrusOne)

CyrusOne is moving dirt in Phoenix. The data center service provider, which is the colocation subsidiary of Cincinnati Bell, broke ground today on a 57-acre parcel of land it purchased in Chandler, Ariz. last fall. The site will house a 1-million-square-foot "Massively Modular" data center that the company says will "deliver scale, power, efficiencies and amenities never-before-seen in a multi-tenant facilities market."

The CyrusOne project could eventually encompass up to 1 million square feet of data center space, the company said. Planned for completion in the first part of 2013, the data center is expected to support 110 megawatts of power capacity, delivered from a substation to be built on the property.

Growth in the Phoenix market has been driven by disaster recovery requirements for West Coast firms, who are attracted by the excellent disaster profile of the area.

"We’re delivering a cost-competitive alternative for our California clientele looking to secure company data away from the earthquakes and other natural disasters experienced there.” said Kevin Timmons, chief technology officer, CyrusOne. “We are confident that CyrusOne's innovative design paired with the excellent operating environment the Phoenix market offers, is an ideal combination for delivering the high-density, mission critical solutions we've become known for, at a scale unmatched by our competitors."

CyrusOne isn't yet releasing details on its Massively Modular design, but says it will be able to commission large data center facilities in approximately 16 weeks, which suggests some element of pore-fabricated construction.

“We are differentiating ourselves in how we bring our products to market, and with the products themselves," said Timmons. "In comparison to other facilities in Phoenix, the immense scale and modularity of CyrusOne’s facility delivers unmatched economic benefits to customers. Its location with respect to power and fiber infrastructure access ensures customer confidence, and the best-in-class office space keeps our customers comfortable while they work, including amenities such as an espresso bar. There’s nothing else like it in the industry.”

The groundbreaking comes on the heels of an industry peer review session the CyrusOne executive team hosted in late April, which featured interactive sessions with the general contractor, architecture firm, and CyrusOne mechanical and electrical engineers in an effort to further optimize the facility design plan.

CyrusOne has 23 facilities across the United States, London, and Singapore. The company’s customers include 16 of the top global 100 companies and four of the top 10.