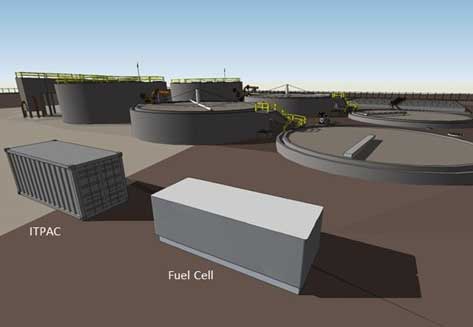 A depiction of one of Microsoft's server-filled IT PAC data center modules paired with a fuel cell at a water treatment plant. Microsoft is contemplating this approach for its first grid-independent Data Plant. (Image: Microsoft)

The initiative is part of the company's long-term strategy to make its cloud computing infrastructure as sustainable and efficient as possible. The first data plant will be powered by biogas, according to Christian Belady, Microsoft's General Manager of Data Center Services. Belady outlined Microsoft's concept in a blog post Wednesday on the Global Foundation Services web site.

"Currently, our team is researching the first-ever grid independent fuel cell, data center that is fueled directly from biogas," Belady wrote. "The experiment is small scale, so we can demonstrate and measure the benefits of it like we did with our 'data center in a tent project' in 2008. We are also talking with several municipalities about a public-private partnership to test a prototype."

That prototype will involve placing modular data centers filled with servers at a water treatment plant or landfill. "Water treatment plants are mission critical installations that produce methane (CH4), a greenhouse gas that is 20 times more potent than CO2, as the sewage from our communities are broken down in an anaerobic digestion process (decomposition without oxygen)," Belady explained. "Landfills produce methane in a similar way as our garbage slowly decomposes underground. The methane that is produced by both approaches must be flared, converting it to CO2 to minimize the impact on the environment."

The methane output will be used in a fuel cell, which in turn will provide electricity for the servers housed in IT PACs (Pre-Assembled Components), Microsoft's custom modular data centers, which can house up to 2,000 servers apiece. A small 200 kW prototype data center will offset over two million pounds of CO2 emissions per year, according to Microsoft, which is the equivalent of about 300 Honda Civics being taken off the road.

Data Centers That Are 'Grid Independent'

Belady says that Microsoft and other operators of large data center networks must focus on becoming "grid independent" in the future.

"Without a bold shift in strategy, our entire industry will become more dependent on a costly, antiquated, and constricted power grid," Belady writes in his blog post. "Independence from the power grid will allow our industry to minimize its impact and ease some of the constriction already taking place. The Data Plant is one way of giving us an ability to manage the growth of our clouds in a thoughtful manner: building in sustainability from the ground-up, so we can run sustainably every day. Our goal is to reduce the impact of our operations and products, and to be a leader in environmental responsibility."