Compass Datacenters plans to bring turn-key data centers to second-tier markets where demand is growing, but hasn't yet reached the scale of historic data center strongholds like Silicon Valley or northern Virginia. The company says it is optimizing its data center design to fit the demand profile of smaller markets. 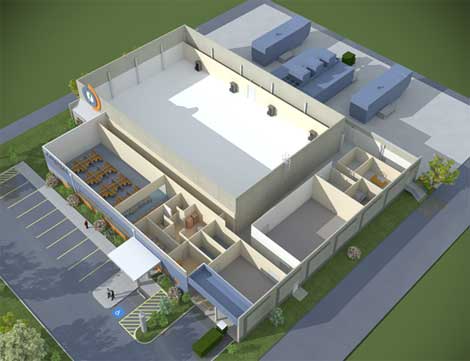 Can the "wholesale" data center leasing model, which has become popular in the biggest internet hubs, succeed in smaller markets? Compass Datacenters aims to find out.

Compass, a new company based in Dallas, is planning to bring turn-key data centers to second-tier markets where demand is growing, but hasn't yet reached the scale of historic data center strongholds like Silicon Valley or northern Virginia. The company says it is optimizing its data center design to fit the demand profile of smaller markets, while deploying its development capital in an efficient manner.

Compass is co-founded by Chris Crosby, a key player for many years at Digital Realty Trust, the company that popularized the wholesale model by leasing finished data center space to enterprise tenants. The wholesale approach established itself in major Internet hubs, but Crosby believes the model is ready to thrive in smaller markets as well.

"The bulk of current investment in the U.S. is concentrated in only six markets with data center products that meet the needs of a very narrow set of customers," said Crosby. "That approach ignores 98 percent of the potential overall market, which means there is a huge untapped market for an innovative company that can pioneer a solution aimed at that large segment of underserved customers."

Where No Wholesale Player Has Gone Before

The company hasn't yet announced its target markets, but says it is scouting cities with successful colocation and managed hosting providers, such as Nashville, Raleigh, Minneapolis and Houston.

"We're really focused on markets where there are retail providers, but they don't have any wholesale offering," said Crosby. "There’s a lot of demand out there in these other markets. IT staff don't like to be more than 20 minutes from their servers. We don't try to buck those trends."

To make the model work in smaller markets, Compass will build smaller data centers. The company has developed a standardized design for a 21,000 square foot data center that Crosby believes will provide the right amount of IT capacity for customers and the right economics for Compass.

"Large structures are difficult to rationalize, except in markets where the demand is really clear," said Crosby. "That makes capacity planning a nightmare. These markets really require bite-sized chunks. The wholesale space really doesn't address this issue."

Each facility will be built on its own parcel of land, offering customers the ability to either lease or purchase the facility. In addition, every data center can be branded with the tenant's  logo and color scheme.

After taking some time off from the industry, Crosby said he believes data center customers are ready for a new approach.

"Looking at recent industry announcements I couldn’t help but feel that although we’ve seen an increase in the number of data center providers, they are all pitching the same thing," Crosby writes in a blog post. "This emphasis on building the next monolithic facility in the Silicon Valley or New Jersey means little to those businesses needing a data center in any location outside of California, New Jersey, Virginia, or Texas. These companies have chosen their locations for a reason."

Economics the Key, Not Location

Crosby is convinced that the attractiveness of the wholesale model is about the economics, not just the location. The option to lease space rather than build will prove compelling for enterprises and service providers across the nation, Crosby said.

"In many of these areas, wholesale hasn't been an option," he said. "It wasn't that long ago that New Jersey didn't have any wholesale data center providers. I never knew I needed an iPhone, because five years ago they didn't exist.

"This isn't going to be for 100% of the people, and isn't intended to be," said Crosby. "If you want a 10 megawatt data center on day one, this isn't for you. We tried to make a simple design that works."

"No matter where you are, Compass Datacenters can provide your company with a hardened, LEED Gold, Tier III-certified facility that has a financial structure that works for your bottom line," said Curtis. "This is the start of a major new phase of growth for the data center industry.”