Microsoft is planning to bring together data centers and renewable power generation, and will announce details of its initiative this week. The company say its vision for "data plants" will break new ground in integrating electricity and computing. 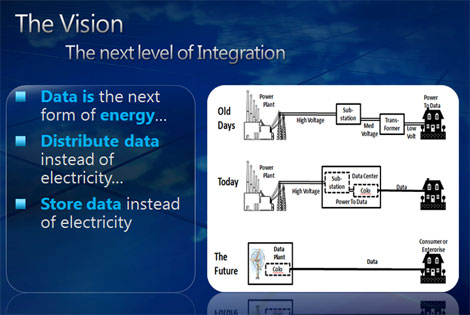 Microsoft is planning to bring together data centers and renewable power generation, and will announce details of its initiative this week. The company say its vision for "data plants" will break new ground in integrating electricity and computing.

"We have already invested millions in research in this area," Microsoft's Christian Belady and Vijay Gill write in a blog post today that previews the new strategy. They predict the evolution of Microsoft's data centers will "take sustainability to new levels with other side benefits in terms of reliability and the ability of using waste gases."

"While we have, and continue, to purchase green energy at many of our locations around the world, we have a fundamental belief that there is a potential to redefine how we and the industry power our data centers," the Microsoft technologists write.

Microsoft's plan to streamline its infrastructure involves placing data centers near renewable energy sources, which could include wind power or facilities that generate power from biomass and waste gases (such as methane). Microsoft says its approach to joining energy and server farms will be "completely different" from existing data center projects that include on-site power generation. The company gave no timetable, but said more details will be published this week.

Belady discussed his vision for data plants last May in an interview with Data Center Knowledge, and in a subsequent blog post titled "The Disappearing Data Center." A key goal is to reduce the energy loss that occurs in power transmission. Google and Facebook have both retooled the power distribution systems inside their data centers to reduce power losses. But Microsoft wants to extend that concept to the power grid.

"Through massive integration of power plants and data centers ... there could be huge efficiency gains by eliminating the need for transmission lines, substations, and transformers (as well as the associated transmission losses) that we see in today’s power distribution ecosystem," Belady and Gill write in today's post. "With these data plants we distribute data (an energy form) in a network (an optical grid) providing the next generation of energy distribution. Looking at it this way, we are essentially taking another step in the evolution of refining the energy being distributed."

In other words, since moving bits over fiber is cheaper than moving electricity over the grid, why not shorten the grid and extend the fiber? At a time when Internet infrastructure closely tracks the availability of cheap electricity, Belady says the key questions will involve the relationship between data and power and how the two move through our economy. Belady has hinted at one possible approach: that Microsoft will partner with an energy company or utility.

"Clearly, our expertise is not in energy generation," Belady told DCK last year. "The objective isn’t to replace that (electric utility) infrastructure. It’s going to be a partnership between people with the right competencies."

Microsoft has also been focused on putting data centers on a diet and slimming down the infrastructure. Belady once ran a rack of servers in a tent for months to show that servers remain reliable using fresh air and minimal protection. Don't be surprised if Microsoft continues to look for ways to push boundaries with temperature ranges and lightweight structures.