Google invested $607 million in its Internet infrastructure in the first quarter of 2012, significantly lower than its spending in the previous quarter. 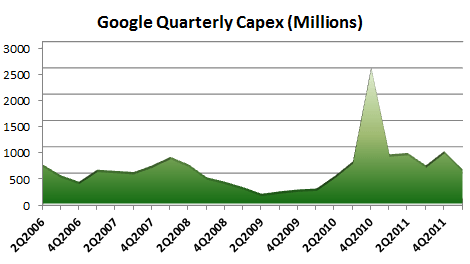 Google invested $607 million in its Internet infrastructure in the first quarter of 2012, significantly lower than its spending in the previous quarter. Google's capital expenditures fluctuate from quarter to quarter, and the dip is likely tied to the completion of active projects, especially the company's new data center in Hamina, Finland.

But there are plenty of projects moving ahead that will require continued spending in coming quarters. This month Google announced plans to double the size of its data center in Pryor, Oklahoma. Last last year the company has announced four new international data center projects, including three new facilities in three markets in Asia (Singapore, Taiwan and Hong Kong) and a new data center in Dublin.