IO has earned Tier III certification from The Uptime Institute for its massive modular data center in Edison, New Jersey, a step that is likely to reassure enterprise customers about the reliability of "container colo" facilities. 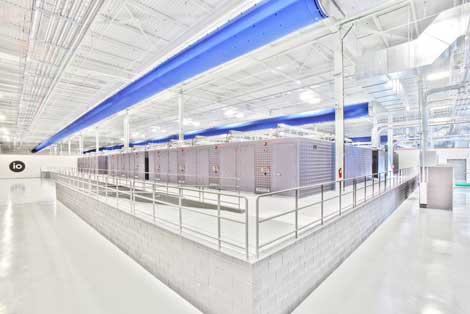 IO has earned Tier III certification from The Uptime Institute for its massive modular data center in Edison, New Jersey, a step that is likely to reassure enterprise customers about the reliability of "container colo" facilities.

IO is among the leaders in the emerging market for modular data centers that are built in a factory using repeatable designs and shipped to a provider facility or customer premises. The company has deployed most of its IO Anywhere modules in large facilities in Phoenix and New Jersey, where the modules are connected to power, water and network connectivity.

The tier system was developed by The Uptime Institute to classify four different levels of data center reliability, and has become central to discussions of how to plan and design data centers. Tier III, the second-highest tier, is the sweet spot for enterprise data center design, delivering the right combination of robust reliability and manageable cost. Tier III is described as "concurrently maintainable," meaning that the data center can continue to operate without service interruption as equipment is maintained or replaced.

By gaining Tier III certification for both its New Jersey and Phoenix facilities, IO is addressing assertions by some in the industry that modular data centers are appropriate for IT capacity with less stringent reliability requirements, such as those for Tier I or Tier II facilities.

Running servers in containers and modules was initially viewed as a niche play by many in the data center industry, limited to mobile requirements, temporary capacity, or novel designs like cloud computing facilities. Analysts and industry watchers have debated whether the efficiencies of modular data centers would be embraced by enterprise users, who are sometimes slow to adopt new technology. In recent months IO and other modular providers have announced a growing number of customer wins, including some from service providers and enterprise customers.

The facilities housing modular units, like IO New Jersey, play a key role in the economics of the new deployment model. The data center environment is managed within the modules, reducing the cooling infrastructure needed for the larger building, which in turn reduces the up-front capital investment to bring a facility online.

IO is not along among modular providers in turning to Uptime to validate the reliability of the model. CapGemini has pursued the same strategy with its Project Merlin modular data center in the UK, which has also gained Tier III status.