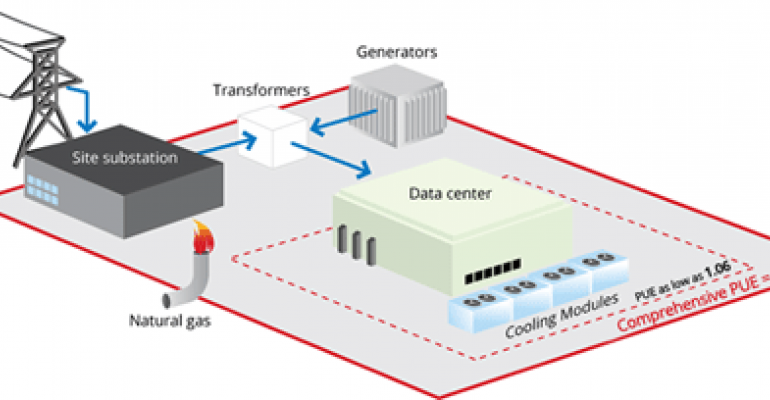 Google: Our PUE is Lower, and It's Scrupulous

Google continues to improve the efficiency of its data centers, recording its lowest Power Usage Effectiveness (PUE) yet in 2011. Google emphasized its use of comprehensive PUE methodology, instead of simpler calculations that could produce a lower PUE.

This chart from Google illustrates the difference between the energy included in a "comprehensive PUE" compared to a partial PUE (click for larger version).

Google continues to improve the efficiency of its data centers, the company said today in its annual update of its infrastructure. Google said that it has lowered the energy usage of its facilities, as measured by Power Usage Effectiveness (PUE), the leading metric for data center power efficiency.

In a blog post, Google senior director of data center operations Joe Kava reported that the company's trailing 12-month average PUE for 2011 was 1.14, an improvement from 1.16 in 2010. That includes a quarterly PUE of 1.12 for the fourth quarter of the year, when one facility recorded a PUE of 1.08 - the lowest ever for a Google data center.

Google also emphasized that it was using "comprehensive, real world" numbers - clearly implying that its efficiency data is compiled more scrupulously than some of the ultra-low PUEs published by other data center operators.

"Our numbers are based on actual production data taken from hundreds of meters installed throughout our data centers, not design specs or best-case scenarios," Kava writes. "One way to think of it is comparing a car manufacturer’s mileage estimates for a new model car to the car’s real-life miles per gallon. We’re measuring real-world mileage so we can improve real-world efficiency."

The PUE metric compares a facility’s total power usage to the amount of power used by the IT equipment, revealing how much is lost in distribution and conversion. When it began publishing its PUE data in 2008, Google said it believed that it operated the world's most efficient data centers. More recently, a number of projects have reported lower PUEs than Google's including some using a partial PUE, a metric developed by The Green Grid to track the efficiency of modular data centers and data halls within a larger building.

"If we chose to use a simpler calculation - for instance, if we included only the data center and the cooling equipment - we could report a PUE as low as 1.06 at our most efficient location," Kava wrote. "But we want to be as comprehensive as possible in our measurements."

The debate about the "PUE Olympics" isn't likely to be settled anytime soon. But for now, even imperfect data is better than none.

"We’ve seen dramatic improvements in efficiency throughout the industry in recent years, but there’s still a lot we can do," said Kava. "Sharing comprehensive measurement data and ideas for improvement can help us all move forward."