IT solutions provider AiNET is converting a former department store into a 300,000 square foot data center where it will offer high-security hosting space, the company said today.

An illustration of the AiNET CyberNAP, a new data center under development in Glen Burnie. (Source: AiNET),

IT solutions provider AiNET is converting a former department store into a 300,000 square foot data center where it will offer high-security hosting space, the company said today. The new CyberNAP facility in Glen Burnie, Md., is not far from a concentration of federal agencies based at Fort Meade.

The facility is scheduled to open in July, and will be the third data center for AiNET, which was founded in 1993 and has built a customer base including enterprises and federal government agencies. The building also has proximity to power generation, with dual feeds from the local utility. AiNET says the CyberNAP will have the capacity to house up to 10,000 server cabinets.

“We have commitments in place from several customers and carriers, and will be making announcements soon,” said Deepak Jain, president of AiNET.

The CyberNAP is a three-story former department store attached to a suburban mall. Each floor has a 20-foot ceiling, and the building can support heavy floor loads.

Jain noted that there are a number of successful precedents for using a mall as a venue for a data center. Examples include a facility for a leading colocation firm at the MetroMall in Miami, an Expedient data center in the Allegheny Center Mall near Pittsburgh, and Lifeline Data Centers, which operates in the Eastgate Mall in Indianapolis.

AiNET will use the multi-floor layout to design separate zones with different tiers of security access for high-security government clients and enterprise customers. “With Cybernet, we will be doing high density power as our standard offering," said Jain. "A number of our customers are federal agencies, and they're focused on new standards and protocols for the federal data center consolidation. This includes SCIF customers with the need for shielded spaces and separation from other customers." SCIF is short for Sensitive Compartmented Information Facility, a federal government standard for buildings that handle key data.

Jain said the CyberNAP is not far from Fort Meade, where the NSA and the Department of Defense's DISA infrastructure unit have operations. AiNET sees a big opportunity in the government's data center consolidation, even though other providers say tight budgets have complicated the process. Jain, who began his career as an information systems specialist for the National Security Agency, says AiNET's experience with federal agencies is a differentiator int he current environment.

Government a Key Customer Base

"There are lots of folks in the data center industry who probably don't understand federal procurement as well as they need to for the data center consolidation initiative," said Jain. "We are savvy about contracts and acquisition strategy, and can document our costs to ease the pressure on their budgets. Services are the key to government business. Pure real estate plays involve longer procurement cycles because they have to go through the GSA.

"Government is very knowledgeable about its needs and challenges," he said. "For us, it's about listening to customers rather than telling them what they need."

Because of its location in a mall setting, the CyberNAP will have 1,500 parking spaces, which Jain said could be used by customers that need to deploy data center cotnainers. "We can accommodate permanent or temporary container capacity, typically for groups that may need to stage containers for shipment around the world. We have the ability to seamlessly scale this."

Jain said there are sections of the building that could provide indoor space for modular units. "We can absolutely use containers inside the building," he said. "If the customer needs containers, we will support them and build the physical layer around them."

Most data center providers in the Washington, D.C. market operate data centers in northern Virginia. But AiNET, which ios based in Beltsville, Md., has focused on building its business in Maryland.

"Our offering will be extremely competitive for colocation and wholesale customers," said Darrell Tanno, Vice President of Business Development for AiNET. "This market has been focused on Northern Virginia. We'll be in Northern Virginia, as Ashburn is the nexus of communication providers.

"But because we also build fiber, we mean to make CyberNAP a major carrier hotel and source of fiber. There also seems to be this myth that energy costs are higher (in Maryland). We will let the numbers do the talking and people will be surprised. This will be a very competitive entry. It will change some misconceptions. 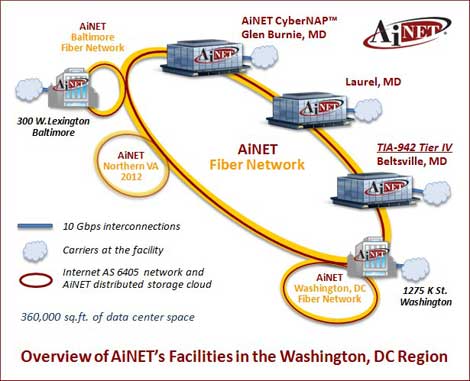