Developer Craig Harrison has put together a proposal for an "energy park" on land near the Colorado-Wyoming border, at the intersection of key fiber, power and natural gas infrastructure. 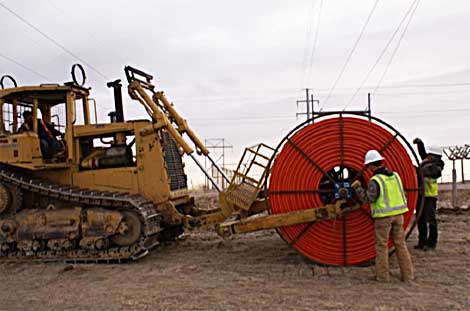 Construction crews lay fiber infrastructure at the Niobrara Data Center Energy Park in Colorado, which is being positioned as an optimal location for on-site renewable energy. (Source: Harrison Resource Corp.)

With a growing focus on harnessing renewable energy to power huge computing clouds, will data center operators get into the energy business? Or will utilities entice cloud operators to build data centers adjacent to energy hubs?

Developer Craig Harrison of Harrison Resource Corp. envisions a project that brings together the ingredients to support either scenario. Working with IDC Architects/CH2M Hill, Harrison has proposed an "energy park" on 644 acres of land near the Colorado-Wyoming border, at the intersection of key fiber, power and natural gas infrastructure.

The vision for the Niobrara Data Center Energy Park is anchored by a microgrid that could draw power from multiple sources, including the local utility grid, a natural gas generation plant, a huge array of solar panels and nearby wind turbine facilities. Harrison believes the property brings together all the components for a data center campus with extraordinary power infrastructure that offers resiliency and a range of energy options.

"With the redundant alternative and clean fossil electricity, along with the connection to the adjoining national fiber highway, this is the ideal site for a mega data center of national importance,"said Harrison. "Niobrara Energy Park is situated in the perfect location, strategically between gas and electric hubs, allowing for stabilization of grid energy and peak demands."

For the moment, Niobrara is a vision in search of a patron. Harrison Resource is a land brokerage firm that has completed hundreds of transactions, including many involving energy-rich properties in Colorado and Wyoming. Harrison says he is hoping to line up a major cloud computing provider, utility or master developer to take over the development of the Niobrara site and build out the infrastructure.

The project reflects the growing linkage between the energy and data center sectors. Harrison Resource is a seasoned player in energy-related real estate that sees data centers as a key customer class for utilities and energy companies. As the growth of cloud computing  forces providers to super-size their infrastructure, their energy needs scale as well. The energy park concept is a way to join these trends  in a real estate play.

Convincing a major data center to become the first tenant in a new location is a challenge in an industry with a history of geographic clustering. But Harrison believes the Niobrara Energy park's location that brings together an unusual number of features that appeal to data center site selectors:

Harrison says the site would be ideal for a data center using the current utility service, but says the microgrid concept would allow a tenant to leverage the full energy potential of the site.

Once challenge is water. The North Weld County Water District has a preliminary plan to build a 22-mile pipeline to the Niobrara property, which could supply up to a million gallons a day of water capacity. Harrison Resource says the pipeline would take at least 11 months to complete.  A second option is to drill a well into the Laramie-Fox Hills Aquifer, which the developer says could produce enough water volume to meet data center needs.

The price of power, currently about 5.9 cents per kilowatt hour, is lower than many metro areas but higher than pricing seen in several emergent data center hubs like central Washington or North Carolina. Harrison believes a large user may be able to arrange a lower rate.

"Our next step is working with the various companies, institutions, and other organizations that have expressed enthusiasm for Niobrara Energy Park," said Harrison.

“Technology is so dependent on energy, and here you’ve got all these different fiber-optic technology corridors going north and south, east and west, that intersect right here, ” said Hickenlooper. “It really is a unique opportunity to have redundant energy to make sure that a strategically important data center is never at risk. I’m going to guess there is probably a handful of places like this in the entire country. We just have to figure out how to get it built.”