https://www.datacenterknowledge.com/sites/all/themes/penton_subtheme_datacenterknowledge/images/logos/footer.png
Recent
Recent
Top 5 Data Center Stories of the Week: March 27, 2020
Mar 27, 2020
Form Jacking: Why Your IT Shop Needs to Take It Seriously
Mar 27, 2020
Array Configuration Belongs on Disaster Recovery Planning Checklist
Mar 26, 2020
Google’s YouTube, Classroom Software Hit by Partial Outages
Mar 26, 2020
The Promise of Intelligent Cybersecurity Is Starting to Come True, Slowly
Mar 25, 2020
Featured
After Kubernetes’ Victory, Its Former Rivals Change Tack
Jan 27, 2020
Explaining Knative, the Project to Liberate Serverless from Cloud Giants
Jan 27, 2020
What Service Meshes Are, and Why Istio Leads the Pack
Oct 28, 2019
IT in 2020: A Look at the Year Ahead
Jan 10, 2020
Cloud

As Zynga (ZNGA) rolls out its new web gaming platform today, it has become the poster child for hybrid cloud platforms that combine in-house data centers with the public cloud. In the process, it has become a major player in the market for wholesale data center space. 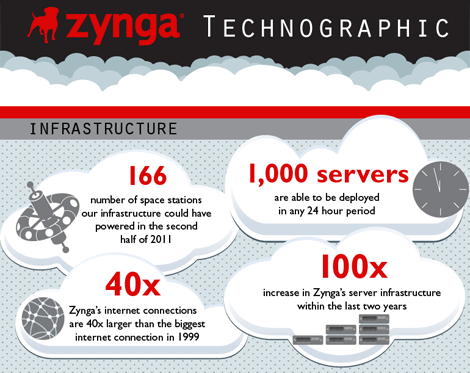 This infographic provides an overview of the infrastructure behind Zynga's gaming platfrom. Click for a larger version. (Source: Zynga)

At one time, Zynga was a prime example of using cloud computing to quickly scale web applications. But as the company rolls out its new web gaming platform today, Zynga has transitioned into a poster child for hybrid platforms that combine in-house data centers with the public cloud.

In the process of building its in-house infrastructure, known as zCloud, Zynga has become a major player in the market for wholesale data center space, leasing several substantial blocks of space on both coasts.

"We've made aggressive moves to leverage our own infrastructure," said Allen Leinwand, the chief technology officer for infrastructure engineering for Zynga (ZNGA) , at the recent Cloud Connect conference in Santa Clara, Calif.. "The hybrid cloud remains our strategy and will always be our strategy."

In its early days, Zynga housed its servers in colocation space. "We ran out of data center space, and ran out of cooling," said Leinwand. That was when Zynga shifted much of its workload to Amazon Web Services, working with cloud management specialist RightScale to leverage the cloud computing service's ability to quickly provision virtual servers to handle spikes in demand.

Rapid Shift from Amazon to zCloud

That flexibility was crucial as the success of Farmville helped Zynga's audience scale. In January 2011, more than 80 percent of Zynga's users were accessing games running on Amazon's infrastructure, with the remainder on Zynga's servers. But that changed dramatically in just 12 months as the company added data center space. As of January 2012, 80 percent of active users were playing games running off zCloud, with the balance using Amazon-hosted servers.

"We made a commitment to own the base and rent the spike," said Leinwand, who calls the company's strategy as "cloudbursting in reverse."

Here's how it works:  Zynga launches a new game in the Amazon EC2 service, and monitors demand as its scales. Once traffic settles into predictable levels, the game is brought back in-house to the zCloud private architecture, which is similar to what Amazon runs. The zCloud is housed in wholesale data center space from companies in Virginia and California. Zynga has created a backbone across its facilities in these different geographic locations.

Part of the challenge in shifting capacity to zCloud was ensuring that Zynga understood its workloads, so it could build its in-house cloud to handle demand. During the second half of 2011, Zynga made capital investments of between $100 million to $150 million in its data center infrastructure.

One of the goals was to prepare to launch the company's own gaming platform on Zynga.com, which will also offer games from third-party developers, allowing partners to reach new audiences and benefit from Zynga's strong presence on social networks.

"We built Zynga.com to give our players more ways to connect with each other and play great social games, whether built by Zynga or other talented developers," said Mark Pincus, founder and CEO, Zynga. "Together with our platform partners, we look forward to bringing more play to the world on our platform."

"Making great social games is challenging and it’s even more difficult to build for scale so millions of people worldwide can play simultaneously and have a great experience," said Cadir Lee, chief technology officer, Zynga. "Our goal for the Zynga Platform is to make it easier for game developers to build the best social games without having to deal with technology challenges."

Although Zynga has reduced its use of EC2, Amazon will continue to be a key partner going forward.

"The Zcloud is our primary infrastructure, but we need that Amazon cloud," said Leinwand. "These are living, breathing services and we need that flexibility. We don't know when the next surge is going to hit."