Google subsidiary Google Fiber, Inc. is seeking permission to place large satellite antennas on land near its data center in Council Bluffs, Iowa. The antennas could be used to receive content feeds from broadcast networks that could be bundled with a high-speed fiber service. 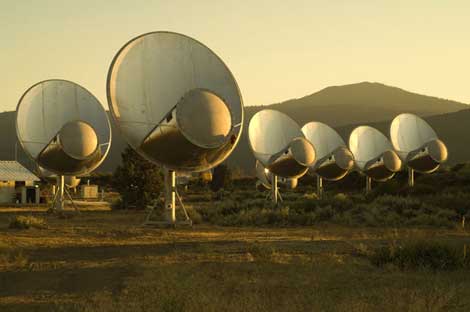 Google subsidiary Google Fiber, Inc. is seeking permission to place satellite antennas on land near its data center in Council Bluffs, Iowa. The antennas could be used to receive content feeds from broadcast networks that could be bundled with a high-speed fiber service.

In a FCC Public Notice (page 11) for Satellite Communication Services Google Fiber is seeking to "register a C-band receive-only earth station and a Ku-band receive-only earth station in Council Bluffs, Iowa." The satellites would be used to provide analog and digital audio, data and video services. The application discusses an array of 4.5 meter satellite dishes, and seeks access to transmissions from satellites including Intelsat 9, which carries international television programming.

Google Fiber was partially turned down by the FCC on February 2. The C-band is used for typical satellite broadcasts and in the lower ranges can perform better in adverse weather. The Ku band operates in a higher range, segmented out according to the ITU (International Telecommunication Union) and is known for broadcasting and editing satellite television.

In late 2007 Google purchased an additional 1,000 acres of land near its $600 million Council Bluffs data center site. Since Google finally updated its own maps (to 2009) for the Council Bluffs site, you can now see both a plot of land immediately to the west of the data center and one directly west of the creek where satellite dishes could be placed.

Just a few hundred miles south of Council Bluffs is Kansas City. Two years ago Google announced their experimental fiber network and plans to award one city with Gigabit to the home service - for which Kansas City was ultimately selected. Last Monday Google Access General Manager Kevin Lo announced on the Google Fiber Blog that Kansas City was ready for fiber. There has been a fair amount of speculation about video services that Google could package around the high speed offering in Kansas City.  When asked about the FCC application a Google spokesperson told the Nonpareil Online, "we're still exploring what product offerings will be available when we launch Google Fiber in Kansas City."

Last December at the Le Web conference Google's Eric Schmidt made the wonderfully optimistic quote about Google TV that "by the summer of 2012, the majority of the televisions you see in stores will have Google TV embedded."

Satellites and nationwide broadband networks have been in the news a lot recently, with LightSquared's ambitions to build a combined satellite and terrestrial mobile broadband network. Google recently won European Union regulatory approval on its acquisition of Motorola Mobility for $12.5 billion. With the acquisition Google will obtain 17,000 patents and 7,500 pending patent applications and a leg up on their mobile wireless business plans.  Satellite feeds in Council Bluffs may fit perfectly into the bigger picture of Google TV everywhere, large fiber build-outs, and a growing number of wireless patents to support Android (and the flurry of law suits).