With $135M in Financing, Vantage is Ready to Build 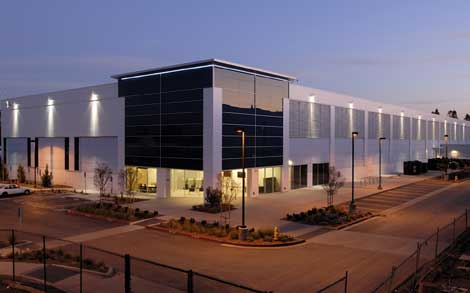 The exterior of the' V2 data center on the Vantage Data Centers campus in Santa Clara, Calif. (Photo: Vantage)

Having quickly leased its first two data center buildings in Santa Clara, Calif., Vantage is stepping up the pace of construction at the third and largest facility on the campus. With a large new project in Washington state also under construction, Vantage tapped the debt market for $135 million from a lending group that includes Royal Bank of Canada, KeyBank, Bank of America, Barclays Bank, Raymond James Bank, FSB and UBS Loan Finance as participants.

“Despite global economic uncertainty, our lenders have demonstrated confidence in our business, our commitment to becoming the world's leading pure-play wholesale data center company and the vision we have crafted with our investors, our employees and our customers,” said Jim Trout, the CEO of Vantage Data Centers.

That confidence is based in part on Vantage’s execution its Santa Clara campus, where it has leased nearly 25 megawatts of space in less than a year in one of the country’s most competitive markets for wholesale data center space.

Its first building, a 6 megawatt retrofitted facility known as V3, is fully leased to four tenants, including Mozilla Corp. Vantage then leased its entire V2 data center to a single tenant in a 9-megawatt lease that is one of the largest wholesale data center transactions.

Vantage has already leased 9 megawatts of space in V1, which is under construction. That includes a lease with Telx, which provides retail colocation and interconnection services.

"The Silicon Valley market remains one of the most competitive globally,” said Trout. “The addition of a retail partner in our Santa Clara campus allows us to maintain our leadership as a pure-play wholesale data center company, while offering current and future customers access to expanded capabilities through partners like Telx. Vantage will continue to lead by demonstrating how our industry can successfully grow without creating conflicts between retail and wholesale developers.”

Vantage's success has gotten the attention of its neighbors in Santa Clara. DuPont Fabros Technology recently lowered its rental assumptions for its Santa Clara facility,citing competition from "private equity players." Vantage says its success in Santa Clara isn't about pricing, but is driven by a process in which it engages early with prospects and customizes space to the tenant’s requirements.

“We took about half the total demand in Santa Clara,” said Greg Ness, the VP of Marketing for Vantage. “It raised eyebrows. If you're using a real estate model, and you see all this leasing, you think it must be about pricing. We're leasing buildings before they're being built, rather than trying to fill existing space that's available. We think the message from the marketplace is that collaboration and innovation are desired, but haven't been available.”

That approach worked for Telx, which shopped multiple options for wholesale space in Santa Clara before signing a lease for 5.7 megawatts at V1, where its space is being designed to support customer power densities up to 400 watts per square foot.

“Vantage’s customized approach was a key factor in our decision to expand into their Santa Clara location,” said Eric Shepcaro, CEO of Telx. “With Vantage, we are able to accommodate our Silicon Valley customers as well as develop a space that meets our specific needs.”

Two other companies have signed leases for space under construction at V1, a 198,000 square foot building with 13 megawatts of space remaining. Vantage says it has “a robust pipeline of customers expected to occupy the remainder of the facility months ahead of schedule.”

Vantage has also announced plans for a 63-acre campus in Quincy, Washington, with a first phase of 6 megawatts that has already been leased to a large enterprise.

Ness says that Vantage's focus on collaborative design is a sign of things to come for the wholesale data center market.

"There's a lot of factors that can make the wholesale space attracted to the enterprise customer," said Ness. "When you get above 1 megawatt of power, the ability to customize (data center design) becomes materially important. I think it's a sustainable competitive advantage, but we'd be foolish not to think the industry will move in this direction."