Networking startup Nicira today unveiled its Network Virtualization Platform (NVP), along with an impressive lineup of companies using its product. Nicira was founded by key players in the development of the OpenFlow protocol for software-defined networking. 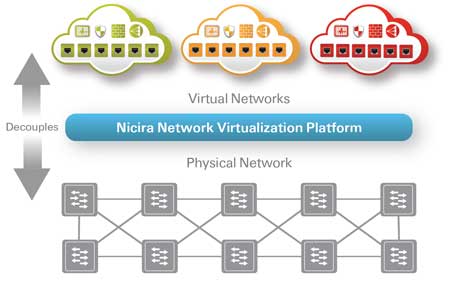 This graphic provides an overview of how Nicira software creates a network virtualization layer to make it easier to manage virtual machines. (Source: Nicira)

Networking startup Nicira today unveiled its Network Virtualization Platform (NVP), along with an impressive lineup of companies using its product. Nicira was founded by key players in the development of the OpenFlow protocol for software-defined networking.

But the company's approach to networking goes beyond OpenFlow. Its software platform manages a network abstraction layer, which lets users create virtual networks that operate independently of the underlying physical network hardware. Nicira says its software will work with any network hardware from any vendor and is hypervisor agnostic, working with VMware ESX, Linux/KVM, Xen Server and Microsoft's HyperV.

Nicira's technology could make it easier to move virtual machines between data centers, an attractive aoption for companies whose infrastructure is spread across many cities or countries. That's one reason that Nicira made its debut with users including AT&T, eBay, Fidelity Investments, NTT and Rackspace.

“Nicira allows us to repurpose network infrastructure on-demand and move applications dynamically," said JC Martin, Cloud Architect at eBay. "This eliminates the operational constraints associated with the existing network environment, and reduces the time it takes us to deliver a service from days to minutes.”

Nicira's NVP software aims to create a network that follows the operational model of a virtual machine, decoupling applications from network hardware as well as server hardware. This could help companies with highly-virtualized server infrastructures overcome current limits on the applications they can support and where the workloads can be placed.

“Network virtualization is the biggest change to networking in 25 years,” said Stephen Mullaney, Chief Executive Officer of Nicira. “NVP provides the final pivotal piece to cloud computing, the most transformational change to IT in a generation. And the largest most forward-thinking cloud providers are laser-focused on operations and economics, the two benefits Nicira delivers.”

Nicira was founded by researchers Martin Casado and Nick McKeown from Stanford University and Scott Shenker from University of California at Berkeley. Casado’s work at Stanford led to the creation of OpenFlow and Software-Defined Networking (SDN), which shifts the networking shifts from hardware to software. The company has raised $50 million from investors including Andreessen Horowitz, Lightspeed Venture Partners and New Enterprise Associates, VMware co-founder Diane Greene and Benchmark Capital co-founder Andy Rachleff.

Nicira is among a group of new companies working with OpenFlow and network virtualization. Other players in this sector include Big Switch Networks and Embrane.

One early differentiator is the praise Nicira is drawing from from existing customers. Here's an overview of customer commentary from today's release:

NVP software is available through a usage-based, monthly subscription, which scales per virtual network port.