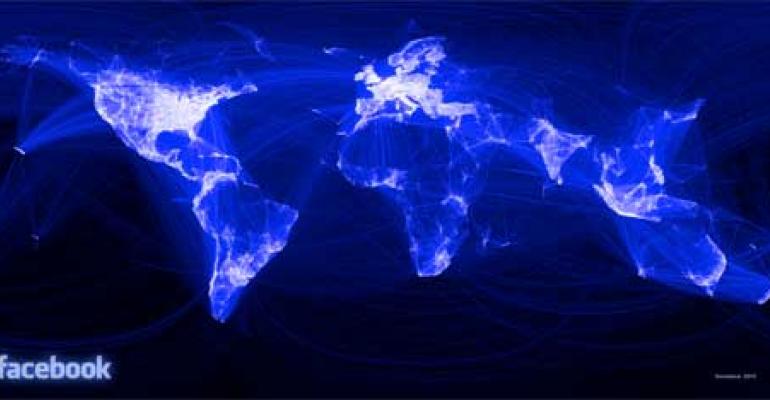 A map of the global audience for Facebook, created by Paul Butler, visualizes the geographic spread of its user base. (Source: Facebook)
Companies>Facebook

Facebook has invested more than $1 billion in the infrastructure that powers its social network, which now serves more than 845 million users a month around the globe. The company spent $606 million on servers, storage, network gear and data centers in 2011, and expects to spend another $500 million this year.

A map of the global audience for Facebook, created by Paul Butler, visualizes the geographic spread of its user base. (Source: Facebook)

Facebook has invested more than $1 billion in the infrastructure that powers its social network, which now serves more than 845 million users a month around the globe. The company spent $606 million on servers, storage, network gear and data centers in 2011, and expects to spend another $500 million this year, Facebook revealed Wednesday in its filing for an initial public stock offering.

The company's massive armada of servers and storage must work together seamlessly to deliver each Facebook page, the company said. "Loading a user’s home page typically requires accessing hundreds of servers, processing tens of thousands of individual pieces of data, and delivering the information selected in less than one second," the company said.

Facebook reported in its SEC filing that it owns "network equipment" valued at $1.016 billion at the close of 2011. The number reflects the expense of rapidly building a massive Internet infrastructure, including Facebook's shift from buying vendor gear and leasing data centers to building its own servers, racks and custom data centers.

Although the shift requires huge capital investment up front, Facebook said its custom designs are " significantly reducing our costs compared to the usage of traditional servers and leased data center facilities."

But that investment is paying off. In 2011 Facebook made about $1 billion in profit on revenue of more than $3.7 billion.

Thus far, Facebook's spending compares well with its Internet-scale peers. Google spent $951 million on its data center operations in just the fourth quarter of 2011, with infrastructure capital expenses of  $3.4 billion for all of 2011.

Facebook's spending is likely to increase as it continues to build out its own data center infrastructure.  The company opened its first  data center in Prineville, Oregon in April 2011, which uses a simplified power distribution system and is filled with servers and racks customized for Facebook's needs.

More Data Centers in the Pipeline

The social network currently has three more data centers under construction, including a second facility in Prineville and new data centers in Rutherford County, North Carolina and Lulea, Sweden.

Facebook said it expects to spend $180 million on real estate leases in 2012, but did not break out how much of that was dedicated to leasing of wholesale data center space, a market in which Facebook is one of the  largest tenants. We have previously estimated Facebook's spending on data center leases to be at least $50 million a year.

One thing's for sure: Facebook's network is only getting bigger. "We plan to continue to significantly expand the size of our infrastructure, " the company said. "We are investing in additional Facebook-owned data centers in the United States and Europe and we aim to deliver Facebook products rapidly and reliably to all users around the world."