IO's new factory serves as an assembly line for modular data centers, and the back-end of the company's effort to reshape the face of the data center market. We take a look inside. 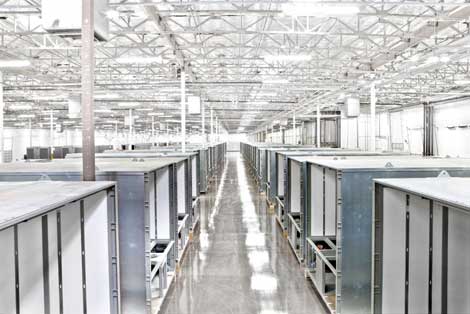 Components for modular data centers are lined up inside the IO factory in Phoenix, where the company mass produces its IO Anywhere modules.

PHOENIX - From the outside, the IO factory is unremarkable. But inside, the building is stocked with the raw materials of data center disruption.

This 225,000 square foot facility is the back-end of IO's effort to reshape the face of the data center market. It's an assembly line for modular data centers.

"Each production line can do stock-to-dock in six days," said George Slessman, chief executive officer of IO, who says the facility is now in the "full-blown production process. We're seeing a tremendous amount of demand."

The Back End of Modular Supply Chain

As adoption of modular designs begins to scale up, the infrastructure focus is shifting from the modules themselves to the back end - the factories to enable mass production of these products.

The IO factory is on the front lines of this effort. At the time of our visit in November, nine completed modules were on site at the factory, and 12 more were under construction on the two production lines. The components for an additional 30 modules were already on site, lined up in rows and ready to be moved onto the line as finished units roll off.

"We've accumulated stock to be ready for the initial wave of demand," said Andreas Zoll, the Vice President of Engineering and Product Development at IO.

Once the modules are finished, they are tested on-site at a commissioning station featuring a generator and a modular chiller plant. They can then be shipped via truck, ship or plane to their final destination.

Modular systems are disruptive on several levels. They shift data center construction from a work site to factories like the IO facility, help drive standardization of components, and shorten delivery times for IT capacity.

Slessman says the combination of the modular design and the factory production can deploy IT capacity cheaper and faster than traditional facilities, which are built for long-term use. "No one goes out and buys 20 years of storage," says Slessman. "Why would you buy your data center that way?"

"I think everyone's wanted a solution for their data center that didn't cost $150 million," says Slessman. "Even the largest companies don't want to spend that kind of money. Going to the CFO with a $5 million question is a lot easier."

With speed-to-market becoming an important criteria for customers, IO points to the opening of its New Jersey data center in Edison, where the first customer was deployed just 90 days after the company took occupancy of the building, a former New York Times printing plant.

For modular data centers to live up to their promise, vendors must create factories, supply chains and delivery systems that can improve upon the economics of the brick-and-mortar economy.

How the Assembly Line Operates

So how do these facilities work? The IO facility is built to operate five production lines. Two were active when we visited in November, and a third line has since become operational. Each line is manned by 17 people, who are spread across six work stations where specific components are installed to support the power, cooling and mechanical systems. IO factory staff work a specific station for three months at a time, and then rotate to a different station for the next three months.

Each IO Anywhere unit begins as two half-size module shells, which are put together to form a module that is 42 feet long and about 13 feet in height.

IO uses large air casters - also known as "air skates" - to move the modules move down the production line. The air casters use compressed air to raise heavy loads (similar to a hovercraft) and allow one or two IO staffers to move modules as heavy as  40,000 pounds. When the modules make their way through all six stations, they are moved to a seventh station at the commissioning area.

Each production line can produce two to three of the modules per week. Once all five lines are operational, that creates a potential capacity of between 800 and 1,000 modules a year.

It's not just the products that are modular. "Our manufacturing is modular as well," said Zoll. "We can take the playbook for this facility and replicate it someplace else. This could even be done at the customer premises."

The pace of IO's growth in New Jersey, and plans for a future site in Singapore, will guide decisions on when and where to increase production. Over time, the cost of shipping the modules from Phoenix to the East Coast could make it cheaper to build a similar facility in New Jersey.

For now, the company is focused on churning out modules to meet existing demand. Slessman points to the factory as a symbol of a new way of building and deploying data center space.

"This is a showroom for us," he said. 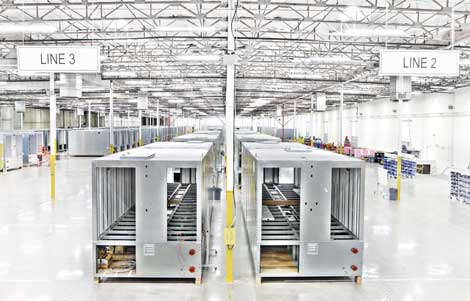 A view of the modules, with the ends now attached, as they make their way down the assembly lines at the IO factory.