Mobile Cloud Computing Will Soar in 2012

Cloud experts predict that mobile cloud computing will become increasingly important in 2012. Given the numbers of smartphones, tablets and other mobile devices shipped every day, more and more users are relying on the cloud as the main driver for satisfying their computing needs. 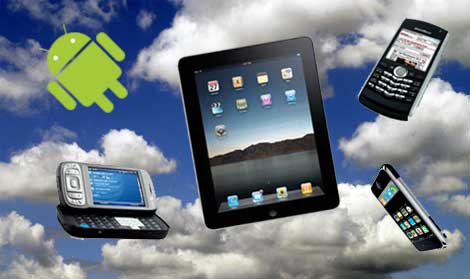 It's no surprise that many cloud experts predict that mobile cloud computing will become increasingly important in 2012. Given the numbers of smartphones, tablets and other mobile devices shipped every day, more and more users are relying on the cloud as the main driver for satisfying their computing needs, whether it is data storage, applications or infrastructure.

A simple Google search for smartphone sales in 2012 quickly reveals booming sales expectations, not least in growing markets like India and China. One of the main reasons for the growth is the availability of affordable devices across all platforms including Windows, Android and Bada.

Secondly, the application of smartphones in industry and corporate settings is supporting increased sales. Previously, the Blackberry was virtually the only accepted corporate smartphone platform. This is changing fast, as both iPhones and Android (and presumably Windows Phone) are being adopted in corporate settings.

Although security issues are still creating many concerns, perhaps especially for the Android, this trend shows no signs of slowing down. This is especially interesting as Android has already captured half of the global smartphone market share, according to Gartner. Whether this is a bomb waiting to explode is hard to determine, but it is clear that malware is growing at an exponential rate, although most users are still unaffected.

According to a Maravedis prediction, Android will continue to be the leading smartphone OS in 2012, accounting for approximately 50% of worldwide market share, followed by iPhone with 18%, Windows with 13% and Blackberry with 12%. Symbian will be largely discontinued by the end of the year.

Tablet sales display a similar picture.  Sales are expected to surge in 2012. Although Apple iPad is still the market leader, it is closely being followed up by several Android designs – most notably from Samsung and Acer and increasingly the budget-friendly Amazon Android Kindle Fire.

These factors contribute heavily to the increasing mobile cloud emphasis. It is however not due only to increasing availability of smartphones and tablets, but also standards and cloud services that support remote data access, storage and apps. Prominent examples include Apple iCloud, Microsoft SkyDrive and DropBox, to name a few. Users are getting used to upload and access their data from the cloud – and increasingly from a mobile device.

In fact, “Visiongain” expect mobile cloud services to reach $45 billion in 2016. The greatest revenue contributions will come from mobile cloud apps, driven by increasing smartphone penetration, growth of 3G network coverage across the globe and deployment of 4G/LTE services. Furthermore, technology enhancements such as BONDI, OneAPI and HTML5 will further enhance the development of cloud based mobile applications.

From the predictions above it certainly seems that mobile cloud computing has a bright future ahead. Mobile Network Operators (MNOs) are likely to enter the domain with carrier-cloud services that are poised to compete with some of the public cloud offerings through service differentiation and network quality levels. This will further help to advance the mobile cloud in industry and corporate settings whereby customers can receive improved service levels and service guarantee.