The U.S. government is continuing its aggressive effort to consolidate its data centers, and has again increased its target for the number of facilities it expects to close to 1,200, according to Federal Chief Information Officer Steven VanRoekel. 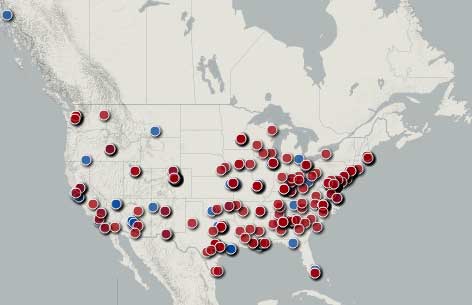 A map of planned data center closures released by the U.S. government.

The U.S. government is continuing its aggressive effort to consolidate its data centers, and has again increased its target for the number of facilities it expects to close, according to Federal Chief Information Officer Steven VanRoekel.

The government now expects to shutter at least 1,200 data centers, or about 40 percent of the 3,133 IT facilities identified in the latest update on the consolidation. The number of data centers has grown steadily as the Obama administration has identified more facilities than expected, and expanded the initiative to target telecom closets.

"Last year, we set an ambitious target of closing 800 data centers by the end of 2015," VanRoekel wrote in a blog post. "After a year of agencies working hard to develop plans and targets, we are not only on track – but exceeding that goal."

The government is on track to close 525 data centers by the end of 2012, including 215 that were shuttered in 2011. That marks an acceleration of the project, as the administration originally expected to close 137 data centers in 2011. A listing of facilities that have been closed or are targeted for closure is available at Data.gov.

That expansion of the project underscores the scope of the challenge facing the Obama administration as it seeks to streamline the government’s IT infrastructure.  The ambitious consolidation was greeted with some skepticism when it was announced in 2009, but the pace of closures has exceeded expectations, and saving money.

The Census Bureau will save $1.7 million this year after closing a contractor-operated 6,570 square foot facility.  The agency is also enhancing its its remaining facilities and now hosts data center services for the International Trade Administration (ITA), another part of the Department of Commerce. The Census Bureau now offers co-location and hosting services to other government agencies, and expects to save 10 percent on its energy bill this year.

"These data centers – some as big as a football field, others as small as a closet –  represent billions in wasted capital that could be better used to improve upon critical services for American taxpayers," said VanRoekel. "By closing data centers, agencies are on track to save taxpayers billions of dollars by cutting spending on wasteful, underutilized hardware, software and operations."