WindData has been formed by veterans of the wind power industry, who plan to build a data center campus in the Austin market that will be get its energy from wind farms in West Texas and the Gulf of Mexico.

An illustration of WindData's planned five-building data center campus in Pflugerville, Texas, which is designed to be supported by wind energy.

The growing focus on "green" data centers has raised the possibility that data center operators might get into the energy business by generating on-site renewable power. A new project in Texas features the opposite approach: a renewable energy company looking to get into the data center business.

WindData has been formed by veterans of the wind power industry, who plan to build a data center campus near Austin, Texas that will be powered by wind farms in West Texas and the Gulf of Mexico. The project is one of the most ambitious efforts yet to make "green" power workable at data center scale.

WindData is a subsidiary of Baryonyx Corp., an energy company run by veterans of Eclipse Energy, a UK firm which developed and then sold a 150 megawatt offshore wind farm. Baryonix was formed in 2009 and began making plans for a data center project in Texas. It hopes to have its first wind-powered facility online by the fourth quarter of 2012.

Baryonyx envisions WindData as a vertically-integrated operation that builds wind farms to generate energy for use in its data centers. A key advantage to this strategy is the ability to offer long-term deals on power pricing, which drives data center site selection.

"We're in a position where we can develop wind resources in one part of the state and transport them via the (ERCOT) grid," said Ian Hatton, CEO of Baryonyx. "We can offer tenants in our data center fixed-price power for the term of the lease. It removes uncertainty about price spikes in the market, and also removes uncertainty from any carbon legislation."

"The WindData-Baryonyx relationship allows us to implement our unique green power delivery concept," said Graeme Walker, the CFO of Baryonyx. "It gives us the ability to offer power using a flat fixed cost structure at a very favorable price, with energy costs as low as 4.6 cents per KWh."

Baryonyx is building a 24 megawatt wind farm in West Texas, which is expected to be ready by the middle of next year. It is also developing two larger wind farms in the Gulf of Mexico, in Rio Grande and Mustang Island.

For the data center half of the equation, WindData has acquired a 50-acre property in Pflugerville, a northern suburb of Austin. The site has 10 megawatts of capacity available from a nearby substation, which also supports the Dell headquarters campus. WindData also will have the ability to add two substations that would add up to 60 megawatts of power. The area is

The company has drawn up plans for up to five data centers on the property, beginning with a 123,000 square foot building that will feature four 1.25 megawatt wholesale suites across 40,000 square feet of raised-floor space. Power equipment will be housed in a separate room, and the data hall floor will have no columns, leaving more room for IT equipment. WindData is working with Critical Project Services, Cassidy Turley and Cushman & Wakefield on developing the project.

There are a number of data center providers that use utility power that is sourced from wind generation, but only a handful of working data centers that use on-site wind generation to provide power for their servers (see Wind-Powered Data Centers for details), and none at the scale WindData is envisioning.

WindData says it will line up multiple renewable energy sources so it will have power available in periods of low wind. The company plans dedicated generators for each data suite.

But first, there's the business of lining up tenants. "We're in discussions with a couple of potential partners that excel in the wholesale market," said Rob Morris of Cassidy Turley. "We thought this would be a disaster recovery play for Dallas and Houston, but we've seen demand from national managed hosting and colo players. We think the long-term power agreements are perhaps the most attractive element of this project."

But WindData has also worked out an incentive package with officials in Pflugerville, including pass-through tax abatements.

"The potential savings to a tenant who invests $25 million in server equipment in the facility would be up to $150,000 per year in city and county Taxes alone," said Roy Philips, the COO of Baryonyx Corporation.

If the Austin project succeeds, WindData plans to explore building a second facility near Abilene, an area that might support a data center with on-site wind turbines, as depicted in the illustration below. 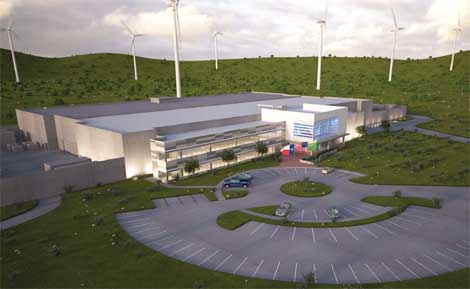