Sabey Data Centers has completed the first facility on its Intergate.Quincy campus in Quincy, Washington and.the first tenant has occupied its space in the 139,000 square foot data center. 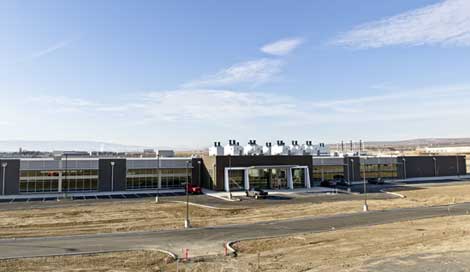 The newly-completed first phase of the Sabey Intergate.Quincy data center in Quincy, Washington. Click the photo for a larger image.

Sabey Data Centers has completed the first facility on its Intergate.Quincy data center campus in Quincy, Washington, just seven months after commencing construction, the company said today.  The first tenant has occupied its space in the 139,000 square foot data center, the initial phase of what will be 520,000 square feet of space in Quincy. Sabey is currently working on tenant improvements for additional customer space.

The Intergate.Quincy campus has 60 megawatts of capacity of hydro-electric power priced at 2.25 cents per kWh, among the lowest-priced power in the nation. Intergate.Quincy is the sister campus to Intergate.Columbia, Sabey’s 430,000 square foot campus located near Wenatchee, Wash.

The Sabey campus is the latest in a series of data center construction project in Quincy, a small town in central Washington that benefits from its cheap green power and a climate that’s ideal for fresh air cooling. Microsoft and Yahoo recently completed the first phases of major expansions in Quincy, while Dell and Vantage Data Centers have facilities under construction.

Construction on Intergate.Quincy began in time for the project to qualify for an exemption from Washington state sales tax (a rate of $.079 in Quincy) on purchases of servers and equipment. "Without the tax incentive, this business might have gone out of state," said John Sabey, President of Sabey Data Centers. "Instead, everyone in the area is benefitting while keeping Washington State globally competitive."

Sabey is also continuing to expand in multiple markets:

Sabey has more than 20 years of experience in the data center business and is perhaps the largest provider of hydro-powered facilities in the United States. Sabey’s current tenants include Microsoft Corporation, JP Morgan Chase, Savvis, Internap, VMware and T-Mobile.