IO is getting into the software business. Today the Phoenix-based colocation provider said that it is offering IO OS, its "data center operating system," as a stand-alone software product. 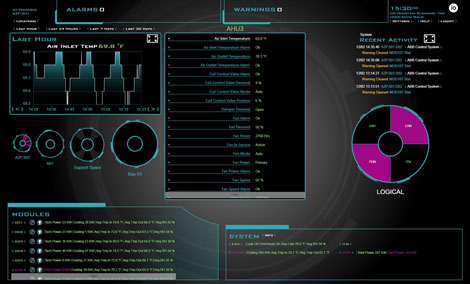 A screen capture of the i/o OS software for managing data center infrastructure.

IO is getting into the software business. Today the Phoenix-based colocation provider said that it is offering IO OS, its "data center operating system," as a stand-alone software product. IO OS was initially developed to manage the IO Anywhere modular data center technology platform, and has since been adapted to manage raised-floor environments as well.

"By extending IO OS to traditional data centers, IO empowers our customers to understand and optimize their legacy data centers and enables their enterprises to seamlessly transition to Data Center 2.0 technology and cloud computing," said George Slessman, CEO of IO.

The release of IO OS as a stand-alone product comes as companies are actively seeking tools to help them manage increasingly complex data center environments. This software category - known broadly as data center infrastructure management or DCIM - has become more crowded in recent years, as a flurry of new companies have introduced software to manage and automate elements of the data center. IO sees its software development efforts as a way to leverage its in-house research-and-development operation and distinguish its offerings in a changing market for IT infrastructure.

IO OS is written in the C#, and provides application programming interfaces (APIs) to allow customers to tie into its capabilities. IO is developing an extensibility roadmap, including a software development kit (SDK) to allow clients and developers to build their own apps to plug into the system. IO says its OS supports most apps and equipment, but the company is also offering an integration service for customers.

In addition to tracking and management capabilities, IO is emphasizing its software’s ability to provide continuous feedback to help identify potential problems and take preventative action.

Features of IO OS software include:

IO also said Monday that it has been awarded a contract with Suntron Corporation, a leading provider of electronics manufacturing services and embedded computing solutions. IO will provide Suntron with Data Center as a Service (DCaaS) at its IO Phoenix location, delivered through its IO Anywhere modular data center technology platform.

Suntron operates prototyping facilities in the United States and Mexico. Their Phoenix facility serves as the corporate headquarters and southwest manufacturing facility, producing high reliability products for aerospace, defense, medical and industrial markets. IO’s compartmentalized architecture provides Suntron and its customers with an added level of security and flexibility to ensure information assets are always protected.

"In dealing with the defense customers that require our NADCAP, AS9100 and ITAR certifications, security and availability of our data are our number one priorities," said Tony Portela, Director of IT at Suntron. “We selected IO because, like us, they deliver innovative solutions tailored to match specific customer requirements, while meeting the highest quality standards."