The influence of the data center team assembled by Yahoo has spread across the industry, as seen in a photo from the 2006 groundbreaking for the Yahoo data center in Quincy, Washington. 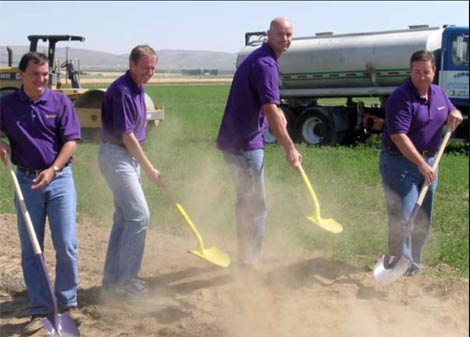 The past few months haven't been easy ones for Yahoo, with the contentious exit of CEO Carol Bartz followed rumors that the company might be sold. We've always maintained that Yahoo’s data center strategy has been one of the company’s major success stories. The Yahoo team has been overhauling the company's infrastructure to run its IT infrastructure more efficiently, saving many millions of dollars in the process.

The influence of the data center team assembled by Yahoo has spread across the industry, as I was reminded when I encountered this photo from the 2006 groundbreaking for the Yahoo data center in Quincy, Washington. Wielding the shovels in the photo above are purple-clad Yahoo team members (from left) Kevin Timmons, Lars Rabbe, Scott Noteboom and Tom Furlong. Timmons now directs the data center effort for CyrusOne, Rabbe is presently the CIO of Skype, Furlong is Director of Site Operations for Facebook, and Noteboom now works for Apple's data center operations.

Yahoo has had its struggles lately, but this photo provides a reminder of its role in seeding innovation in the industry, both within Yahoo and in the data center operations of some of its competitors.